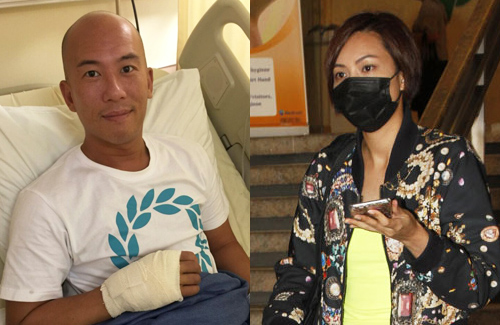 Since former EO2 member Eddie Pang (彭懷安) was spotted behaving intimately with another woman, Queenie Chu (朱慧敏) has delayed their wedding plans. While Queenie does not believe that Eddie had cheated, the incident proved that the couple still had issues to iron out in their relationship. Despite this, Queenie still cares about Eddie and visited him at the hospital yesterday after he had surgery.

While working in his mooncake production shop in preparation for the Autumn Festival, Eddie broke his hand and was hospitalized for emergency surgery. Queenie said, “His hand became deformed after the injury. They’re giving him anesthetics so they can surgically correct it.”

When asked whether they have officially broken up, Queenie did not answer the question directly and said they are still good friends and business partners. Expressing that relationship matters are complicated, Queenie said, “Everyone has been saying that [we broke up]. I never said that. Our relationship has always been good. The only problem that has arisen is whether or not we will proceed with marriage.”

On whether she has forgiven Eddie, Queenie responded, “I’ve said it many times. I was angry that he went out and got photographed while accompanying the woman home. But I still trust his character and I don’t believe that he was disloyal to me. Maybe I explained it unclearly that day. There are a lot of things that only we would understand. It is true that we are not going to get married yet. We hope to use this time to deal with our feelings.”