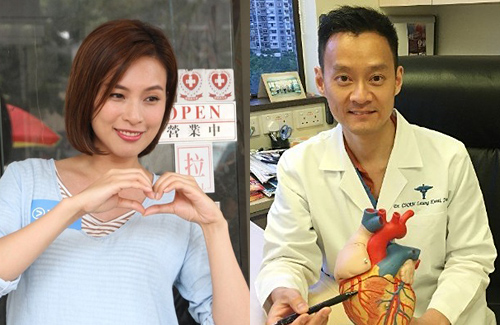 After several tumultuous relationships, 39-year-old actress Queenie Chu (朱慧敏) has finally found her happiness. Dating 42-year-old cardiologist Jason Chan (陳良貴) for one year, Queenie accepted his proposal and the couple has filed for marriage registration. The application revealed that the couple resides at an address in the prestigious Mid-Levels district.

The previous men that Queen were involved with had disappointed her. Actor Joey Leung (梁榮忠) was already attached when Queenie got involved with him, and her relationship with Taiwanese boyfriend Rick Chang ended because she was too focused on her career. She broke off her engagement with singer Eddie Pang (彭懷安) after his infidelity came to light. Since their 7-year relationship ended, Eddie has gotten married and become a father.

Deciding to step away from the entertainment industry, Queenie traveled to the United States to study clinical hypnotherapy and successfully obtained a professional license. After returning to Hong Kong, Queenie was engaged in hypnotherapy practice and has handled more than 50 cases since.

A friend close to Queenie revealed that after going through tumultuous relationships in the past, Queenie felt jaded and pessimistic about love. Meeting Jason through mutual friends last year, her life became happier as he filled her with positive energy.

Regarding her marriage registration, Queenie responded via text message and thanked the public for their well wishes, and that she and Jason are grateful for all the love and support.

When Eddie was later reached for comments, he merely shared his blessings and wished his ex-girlfriend well.