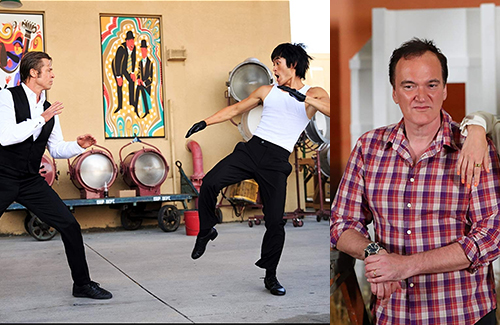 Quentin Tarantino has responded to criticism on his depiction of the late Bruce Lee (李小龍) in his new film Once Upon a Time in Hollywood. The film, set in the late 1960s, stars Leonardo DiCaprio as a has-been television actor, with Brad Pitt starring as his best friend and stunt double. Bruce Lee (portrayed by Mike Moh) makes an appearance in the film as a rival to Brad Pitt’s character, Cliff Booth.

Bruce Lee’s daughter Shannon Lee (李香凝) has come forth expressing her disappointment in the film, saying that the movie had disrespected her father. She felt uncomfortable with the depiction, in which the film portrayed Bruce Lee as “an arrogant a-hole full of hot air.”

“It was against my father’s philosophy to pick up a fight,” she said.

However, Tarantino has defended his depiction in the film. While promoting the film in a press junket held in Moscow, the director said, “I didn’t just make a lot of that up. I heard him say things like that, to that effect. If people are saying, ‘Well he never said he could beat up Muhammad Ali.’ Well, yeah, he did. Not only did he say that, but his wife, Linda Lee, said that in her first biography I ever read. She absolutely said that.”

“Linda was quoting a TV critic,” said Polly, in regard to Tarantino’s claim that Linda herself had said Lee could beat up Ali. Polly quoted, “Even the most scathing critics admitted that Bruce’s gungfu was sensational. One critic wrote: ‘Those who watched him would bet on Lee to render Cassius Clay senseless if they were put in a room and told that anything goes.’”

Polly then went on to say that Lee was obsessed with Ali, having studied all of his fights in detail. He continued, “He frequently imagined fighting Ali… BUT when asked directly by John Saxon if he could beat Ali, Bruce replied, ‘Look at my hand. That’s a little Chinese hand. He’d kill me.’”