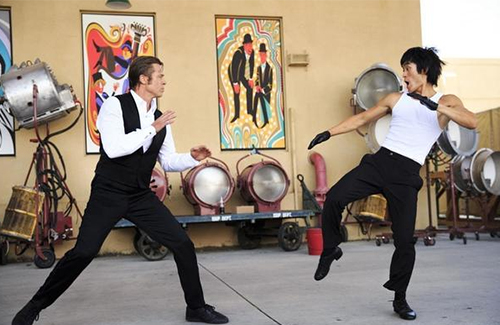 Bruce Lee’s (李小龍) daughter Shannon Lee (李香凝) is disappointed with the way how her father was portrayed in Quentin Tarantino’s new film Once Upon a Time in Hollywood, calling the portrayal “disheartening” and “uncomfortable.”

Once Upon a Time in Hollywood, set in 1969, stars Leonardo DiCaprio as Rick Dalton, a Western television star who is struggling to deal with his faltering Hollywood career. Brad Pitt stars as Cliff Booth, his close friend and longtime stunt double.

In the film, Dalton and Booth encounter Bruce Lee (portrayed by Mike Moh), who at the time was filming the television show The Green Hornet. They have a sparring match after Booth and Lee exchange cocky insults at each other.

Shannon Lee said she found it “disheartening” to see her father being portrayed as an “arrogant a-hole full of hot air.” While she understood that the characters in the film are just caricatures, and that the writers wanted to make Booth and Lee as antagonists of each other, she was “uncomfortable” with the way how her father was portrayed—an arrogant prick who picked up fights wherever he went.

“It was really uncomfortable to sit in the theater and listen to people laugh at my father,” she said.

As an Asian American actor in 1960’s Hollywood, Bruce Lee had to work much harder than his white American counterparts in order to succeed. While he was often challenged for fights, he would always avoid them. It was against his philosophy.

On the other hand, the high profile golden actor Steve McQueen, portrayed by Damian Lewis, was not made fun of in the film.

Nonetheless, Shannon Lee did praise Mike Moh’s portrayal of her father, saying that he did a good job with her father’s mannerisms and voice.

Once Upon a Time in Hollywood was released on July 26th in the United States.