Busy on twin fronts in filming and music, 41-year-old Raymond Lam (林峯) is enjoying high exposure this year, with the full support of his wife Carina Zhang (張馨月)!

King of Chok In A Rosy Mood 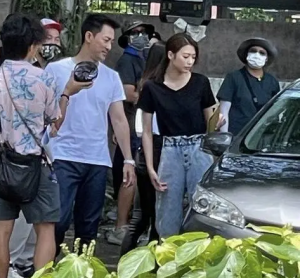 With his career on the upswing following the arrival of his daughter, nicknamed “Princess Precious” (格格寶), Raymond recently signed with Warner Music, looking to fill the spot left by top male singer Alfred Hui (許廷鏗), who departed from the company in March. He will also headline the upcoming Shaw Brothers-Youku co-produced  suspenseful web drama In the Storm <黑金風暴> as male lead.

The anti-corruption themed drama zooms in on the ICAC and serious crimes unit collaborating to crack down on corruption syndicates. Raymond and other cast members including Chrissie Chau (周秀娜),  Lee Chan Sam (李燦琛) and Lynn Xiong (熊黛林) had just returned to Hong Kong in mid-July after on-location shooting in Shenzhen and Macau.

Spotted filming at Kowloon Tong,  Raymond was already perspiring from pacing up and down during rehearsals with co-star Shiga Lin (連詩雅), and took breaks in the air-conditioned van in between camera rolls. Despite the sweltering weather, Raymond appeared to be in a chirpy mood and chatted with the production crew. 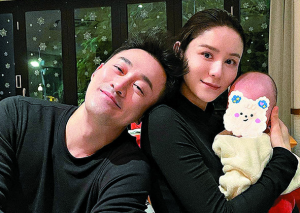 Focused on the Chinese market in recent years, Raymond recently switched music labels after leaving Emperor Entertainment in 2017. He renewed his collaboration with famed music producer Schumann Lee (舒文) who specially crafted a new song The Voice of Love < 唱情歌的人> for Raymond, who intends for it to be a gift for his loyal music fans.

Traveling frequently for work, his wife Carina and young daughter would also tag along. Showing himself to be a doting husband on reality show Viva La Romance <妻子的浪漫旅行5>, Raymond would habitually “report” to his wife first upon reaching home from work before going to his daughter. Fans also spotted Raymond carrying his daughter while out, while Carina coolly confided that Raymond would take the effort to prepare supper late at night for her even if he has early 6 a.m. work calls the following morning!

Listen to Raymond’s new single The Voice of Love <唱情歌的人>: