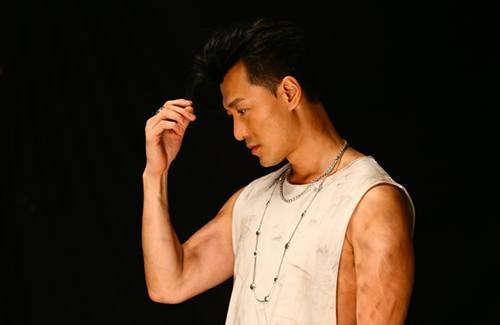 Raymond Lam (林峯) is currently busy preparing for his April concert at the Hong Kong Coliseum. This will be Raymond’s fifth time performing at the Coliseum.

Emperor Entertainment Group, Raymond’s management company, has allegedly spent hundreds of thousands US dollars on publicity for the concert, including spending $77,000 USD on a massive billboard overlooking a highway in the Kowloon district. Raymond revealed that he had seen the billboard, “I deliberately drove past it a few days ago. It looks very good! The last time I had a concert was three years ago. I hope that this time, I will have something new to impress my fans, especially in terms of my dance moves!”

On the details of his concert preparation, Raymond has been working hard in the gym and he is becoming addicted to working out, “Initially, the first month was very difficult, but I slowly started to relish the process. Every morning, I would jog on an empty stomach.”

On whether Raymond has managed to train up defined abdominal muscles, he laughed and said, “It’s not easy. I can’t even drink too much water. It’s really hard to train up abs.”

Raymond has also been watching his diet. He said, “For instance, I have been eating out less.” Does Raymond’s girlfriend, Karena Ng (吳千語) mind? Raymond said, “No, she’s fine. We normally steam food at home anyway.”

Would Raymond look to Alex To (杜德偉) and perform a “striptease” on stage? Raymond laughed, ‘Well, he has a song titled, “Strip” <脫掉> and I have a song titled, “Take your pants off” <除褲>. I tend to perspire a lot and I also hate the heat, so I may gradually take my clothing off piece by piece. It will all depend on the song list for that day. I hope everyone will dance along with me if that happens!”

1 comment to Raymond Lam May Strip for Upcoming Concert