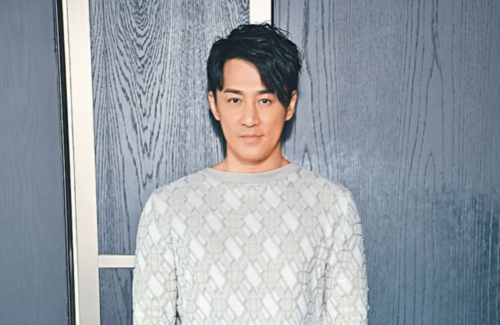 Since artiste Raymond Lam (林峯) signed with Sky High Entertainment, Louis Koo’s (古天樂) management agency last year, he was given the opportunity to take on various roles. Take, for example, the 39-year-old’s character in P Storm <P風暴>, the latest installment of the Hong Kong crime thriller franchise, in which he plays a second-generation millionaire psychopath in jail.

Raymond expressed, “I came across a couple of good scripts in 2018, so I was able to play the characters I’ve always wanted to try. Like this time, I was able to take a stab at playing a villain, and the character’s schizophrenic and bipolar. The role allowed me to release the fire that’s been burning inside of me, letting the audience in on another side of me.”

It was his first time playing a coldblooded wealthy second generation after 20 years in the industry. He said he paid special attention to his acting, so as not to overdo it, “Since the role’s evilness is more external, I had to carefully control it, otherwise it would be too much. I have to allow the audience to watch it comfortably.”

The setting of the film is in prison, and has a similar vibe to Prison on Fire <監獄風雲>, according to Raymond. “Louis and I have a lot of action scenes. I thought there must be a lot of underlings around me when I want to fight since I’m a rich second generation. But actually, there are many action scenes in the movie that I need to do myself, and most of them are with bare hands! It’s very difficult,” Raymond shared.

Challenges aside, the actor said he’s had a fruitful 2018 in his acting career. “Because I tried so much in 2018, I was feeling a bit lost at the start of 2019. If you ask me what other characters I want to try playing, I can’t think of any because I really got to satisfy my acting addiction last year,” he expressed.

In addition to P Storm, Raymond also has film Back to the Past <尋秦記> awaiting to greet customers. Cooperating with Louis again after 18 years, Raymond said Louis is still handsome, mature and dependent, and charismatic. He added that he’s also changed a lot himself.

Raymond’s work schedule has already been planned out for until the end of the year. He has some films and TV series lined up, as well as the Mainland concert tour. However, he hopes he can also open a show in Hong Kong as well. “Since I can still move and jump, I want to open another concert. Concerts require more physical strength than filming. It really takes time to train my physical fitness,” Raymond said.

When asked if he’d have time for dates, Raymond replied with, “The previous marriage rumors are untrue. I will only talk about work in the future, because every work is the result of the crew and cast’s blood, sweat, and tears. If you focus on other areas, you will waste everyone’s hard work. In short, I am doing well right now; mommy also did not rush me to get marry.”