Ever since Regina Ho (何依婷) won first runner-up in Miss Hong Kong 2017, her career has been on the fast track. Starring in prominent roles, the 27-year-old is the hottest contender to win Most Improved Actress at this year’s TVB Anniversary Awards.

Given countless opportunities, from hosting Sidewalk Scientist <學是學非> to her head-turning role as a paralyzed doctor in Kids’ Lives Matter <星空下的仁醫>, Regina’s acting has noticeably improved.

Feeling grateful for the compliments, Regina said, “I received a lot of sympathy messages lately in regards to my character’s situation [in Kids’ Lives Matter]. Thank you for everyone’s approval, but I don’t think my character’s condition will heal.” As to whether she has delivered an award-winning performance, Regina is not too concerned, as she “needs to improve whether or not awards are involved.” 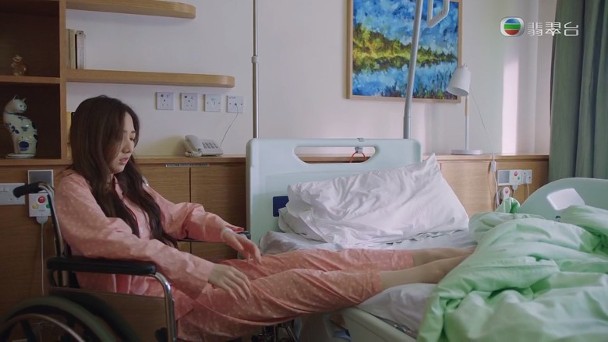 Viewers can continue seeing more of Regina’s acting in upcoming drama, A Love of No Words which is a remake of Return of the Cuckoo <十月初五的月光>, when it airs on November 22. Commenting on the pressure of her first leading role, she said, “I didn’t think much about it, but I was very lucky. There are so many veterans in every drama, so it is really a blessing just to be a part of it.”

Partnering again with Kenneth Ma (馬國明) in her new drama Legal Spokesperson <法言人>, Regina will be playing a secretary at a law firm. Many netizens find Regina to closely resemble Korean actress Park Min Young, who also played a secretary in the drama What’s Wrong With Secretary Kim <金秘書為何那樣>. In response to that comparison, Regina said, “I feel grateful to be playing such diverse roles. I’m also thankful that people find I look like Park Min Young, but of course she is a lot prettier.”