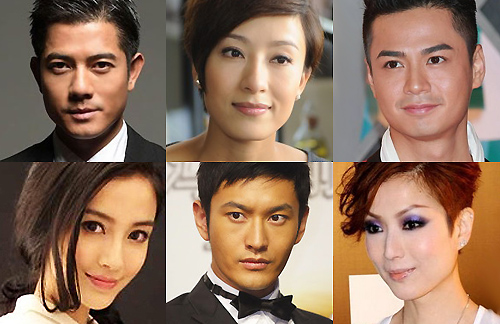 Joel Chan (陳山聰) and Florinda Ho (何超雲) – The Year of the Golden Snake will be a critical year for Joel and Florinda. The signs align to make it an auspicious year to get married. However, if the couple forsakes marriage this year, their relationship may be threatened.

Sammi Cheng (鄭秀文) and Andy Hui (許志安)- This year is the perfect year for Sammi and Andy to get married.  Sammi may even become pregnant, resulting in a year of “double happiness” for the long-time lovers.

Huang Xiaoming (黃曉明) and Angelababy– Both born under the snake sign, Xiaoming and Angelababy will encounter negative Jupiter energy, or Fan Tai Shui, this year. Although marriage may help dissolve the threats in their relationship, a marriage union is slim since Xiaoming’s fate ties him to a woman born outside of China as opposed to the mainland-born Angelababy. The next two years will be a critical time period for the couple.

Lynn Hung (熊黛林) and Aaron Kwok (郭富城) – Last year was the optimal year of marriage for Lynn and Aaron. If the pair missed the opportunity to get secretly married, then it will be difficult to sustain their relationship in the Year of the Golden Snake without borrowing luck.

Miriam Yeung (楊千嬅) and Real Ting (丁子高)- After having a dragon boy in 2012, there is a good chance that Miriam will once again become pregnant at the end of this year.

Joey Yung (容祖兒) and Wilfred Lau (劉浩龍)- After revealing their relationship last year, Joey and Wilfred encountered much negative publicity. The couple’s relationship will have many uncertainties this year. Aside from not having any breakthroughs, the relationship may suffer setbacks and fizzle out.

Tavia Yeung (楊怡) and Him Law (羅仲謙)- Tavia and Him’s relationship will remain stable in the Year of the Golden Snake. Based on a face reading of Him’s facial features, it appears that his romantic fate is in constant flux and will need a lengthy period of time to encounter his true life partner.

JJ Jia (賈曉晨) and Louis Fan (樊少皇)- Although JJ is willing to place love above all else, the long-term outlook of her relationship development with Louis is shaky. Their relationship may drag and not advance as desired.

In addition to predicting the relationship outlooks of celebrity couples, Mak Ling Ling also forsees that Ricky Wong’s (王維基) HKTV may encounter a positive turning point in seeking the approval of a television broadcasting license in the second-half of the year. TVB’s luck remains strong and will remain the top station in Hong Kong, while ATV’s fate will remain unaltered from its current status. Additionally, new younger artists will have greater opportunities for breakthroughs in their careers this year.

48 comments to Relationship Outlooks in Year of Golden Snake