Review: Curse of the Royal Harem (By Bridget) 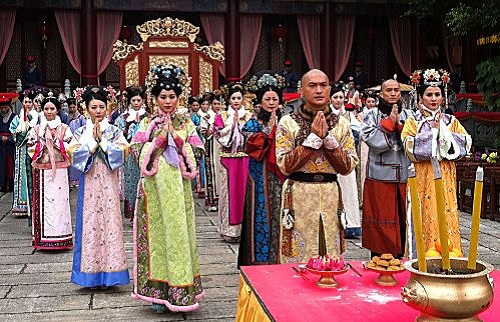 Not War and Beauty, that’s for sure.

It’s been awhile since I’ve watched a TVB series and that’s because I’ve become indifferent.  Thinking Curse of the Royal Harem would at least bring about a reaction out of this nearly dead soul (TVB-wise, at least), I picked up this series after the holidays.  And I watched it. And then…

I didn’t know what to think.

This series reminds me of the tagline from MTV’s Diary: “You think you know, but you have no idea.”  I give props to the writers for attempting something unconventional among the usual concubine-fighting storylines, but the result is a theme that is loftily explained, and a series that ends up missing the mark by a few thousand miles.  Curse of the Royal Harem gets points for trying, and then proceeds to lose them all (and then some) for execution. Jess… oh Jess.  She gets off on the wrong foot (not her fault though) immediately because she doesn’t work in an ancient series.  She’s like Flora Chan in ancient series minus the Western accent.  Her look is too modern, not to mention she is way too old for her role.  I think of Yee Lan as a young widow, maybe in her mid-20s at the most, and Jess, while
looking good for her age, looks…seasoned.  I kept thinking of the buzzer sound (you know, the “ehhhhhh you’re wrong” buzzer sound in game shows) whenever she was onscreen.  Period elegance?  Buzzer.  Period grace?  Buzzer.  Period femininity?  Buzzer.  Just like Kevin Cheng’s first scene in Beyond the Realm of Conscience, I laughed when Jess made
her appearance.  A flower enthusiast?!  Please, the woman is more convincing as a news anchor.  Not that they had those back then.

There are two main issues with Jess here.  One is her voice; it’s monotone.  She tries hard to be feminine, gentle, and quiet as Yee Lan but instead her voice comes off as robotic.  The other is her acting; she doesn’t look burdened or melancholy as Yee Lan is supposed to be. Most of the time, she just looks annoyed.  Patience does yield rewards here as Jess’ performance in the later part of Curse of the Royal Harem gradually improves–a little.  Her single best moment was when Yee Lan was faced with a dilemma of whether to save Yuen Yuen’s son and her choice at the end. Ultimately though, Jess’ performance is thin, bland, and does nearly nothing to engage the audience. Myolie Wu treads the same path as Jess in here, but for different reasons.  In the beginning, Jess underacted, while Myolie overacted. The bulging eyes, the constant head movements, the overdone pout…. I was almost reminded of her awful performance in War of In-Laws (which very nearly turned me from a Myolie fan to an anti-fan).  Both Myolie’s performance and the character of Yuen Yuen came off as childish, stupid, and somewhat aimless when everything was stripped away.  Yuen Yuen was little more than a puppet of her mother’s.  She never seemed ambitious on her own or particularly thirsty for power; everything she did seemed to be just for the goal of pleasing her mother.  A poorly written character – the scriptwriters tried to create a Kam Ling from Beyond the Realm of Conscience and instead ended up more with a Yee Sun from War & Beauty--nothing more than a puppet who never really reached her potential as a villain.  Ironically, Myolie improves dramatically once her character becomes less interesting–that is, when she is banished to the cold palace.  I see glimmers of her innocence and child-woman-ness from her Golden Faith and Doomed to Oblivion performances, and her character becomes much easier to empathize with because of that.

Yes, I know Myolie won Best Actress for this.  Don’t ask me how.  I’m just a reviewer, man.

Despite the name and intent of the series, the men manage to be just as, if not more, interesting than the women in here.

Joel Chan, in the midst of his offscreen media circus with socialite Florinda Ho, performs gamely as Min Yan.  The anger, the courage, the longing for Yuen Yuen, the guilt about Lok Yan and even to an extent, Min Yan’s integrity, were all convincingly portrayed and he does have the look of a young military general from the era.  And he has chemistry with Myolie.  Easily one of the best performances in the series.

You know, Min Yan really should have been king.  He’s decisive; he has an opinion; he has a spine.  The problem with him is that he is a die hard romantic, which is something that I actually like in the character. He is loyal, not only to the woman he loves but faithful to his brother and king.  So he did sleep with Yuen Yuen, but that was because he really loved her.  It was never meant as an act of malice towards his brother and he remains faithful to the end, even silently allowing his real son to be known as his brother’s son.  He could have easily joined forces with his mother to usurp the throne, but never did the thought even cross his mind.  The king was lucky to have him as a brother and servant.  For once I was glad Min Yan didn’t descend into villain hood and I think of his end as fitting and a good thing for a good character. He died with Yuen Yuen, knowing she loved him.  It was an anti-climatic, but romantic scene.

Sunny Chan, who has long been typecast in the weak man characters, does his job as the king.  The desperation to protect Yee Lan, the wimpy crying, the overall weaknesses of the character were well-portrayed.  His character, though, was literally useless.  There is no character arc here, he goes from a little useless, to more useless, and then completely useless.  I thought the whole opium storyline would have given the king some kind of development, but nothing really happened there.  The fact that he allowed Min Yan and Yuen Yuen’s son to not just live, but live as the second prince was indicative of not the
character’s compassion, but utter uselessness, weakness and indecisiveness in the face of challenge.  That plot in itself was illogical and a huge plot hole, no way in hell would a bastard child have survived back then, even with a useless king. Someone like an eunuch, minister, older concubine or even the Dowager Empress would have offed the kid (despite him being her biological grandchild).  If he had loved Yee Lan single-mindedly (like the series suggested at the beginning), the character would have had so much more potential and could have amounted to something like Louis Koo’s Qian Long from War and Remembrance.  Instead, the king here just appears fickle and childish with his very flavour-of the-month treatment of his women.

The Dowager Empress made no sense to me.  She propped up her adopted son to be king out of guilt for accidentally killing his mother and basically raised him as one of her own, but what made her ultimately try and prop her own son as king instead?  Was the guilt only temporary? The series never explained this and I was left very confused.  The
acting was a yawn too.  Gigi Wong has never been a strong veteran actress and her performance is tepid at best.  While she has the looks of a Dowager Empress, she acted more worried than sinister half the time.  Elena Kong was scarier than her.  They should have switched roles because Elena also looks regal and something about her eyes and overall demeanor is intimidating and I am sure she could have done the Dowager
Empress justice.

I finally know who Sire Ma is after watching this series.  Her performance is adequate here; her voice is appropriately young for the role, and she is cute, eager, and even somewhat sweet as Lok Yan.  She’s rather plain-looking, but acting-wise I would say she has potential, which is a good thing because God knows there’s almost no one left in
TVB to act in series.

I normally like Nancy Wu but something about her irked me in here.  I will blame it on inconsistency in her performance and even a bit of overacting, as well as a one-dimensional character who really does nothing to add value to the plot and her own character arc was flat. She was selfish from beginning to end; that’s it.  And the way she
became concubine was even more idiotic than On Sin from War and Beauty.

Cheung Kwok Keung as Eunuch Fuk On was exceptional, as were Rebecca Chan and the older actors who portrayed the ministers in this series. Unfortunately, the girls who played the other concubines were terrible. Even the costumes and setting leave something to be desired.  The cast looks like a rich scholarly family, instead of royalty.  TVB must be running out of money.

Let’s just say this series is difficult to recommend…and life is challenging enough as it is, isn’t it? 30 comments to Review: Curse of the Royal Harem (By Bridget)