Review: “Triumph in the Skies 2” (by Miriamfanz) 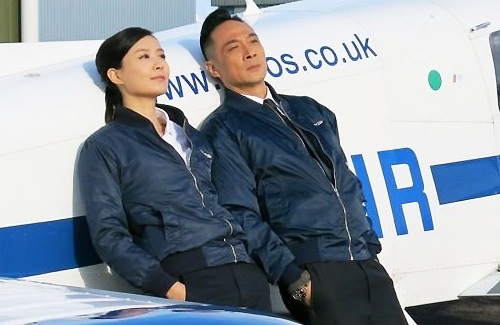 Review:
Imagine the series as a plane flight. After a lengthy delay, passengers finally get to board the flight, where they are unexpectedly welcomed by an unfamiliar tune. Nonetheless, it’s been a long wait and everyone is just happy to be on board. The plane has a smooth takeoff. As the plane makes its climb, the passengers look out the window, seeing the city they are leaving and looking forward to the journey ahead. The plane starts cruising along at 9,000 m. Everyone is settled in comfortably and the flight attendants hand out some snacks. The passengers were expecting the main course, but they accept it anyways. The attendants come around again, this time with drinks. Still no main course. By now, some people start to get restless. They check the flight tracker and find the plane is still at the same level. Nothing wrong with this height, just that we had expected the plane to fly higher. Then slowly but surely, the plane starts losing altitude. Why? Because Holiday is controlling it. Not everyone notices, because some are no longer paying attention. The few that do complain loudly. Finally, before anyone realizes, the plane has touched down for a safe landing. Fans of the original have waited ten long years for a sequel, so everyone is understandably excited for this series. Not even a crappy theme song can change that mood. The first few episodes don’t disappoint. Bright, beautiful scenery, with everyone looking sharp in their uniforms. Captain Koo is especially charming and steals the spotlight just as easily as he steals women’s hearts. We relieve memories from the original and find out what our beloved Sam, Isaac, Roy and Coco have been up to in the past ten years. But further development of these characters eludes us for 20 episodes. Instead, we are served with random side stories and a lovesick Holiday. Gradually, some viewers get bored and find something else to do. For those who stuck around, we wonder: is anything exciting actually going to happen? The short answer is no. There are some bumps along the way, but it is mostly a calm flight from start to finish. TVB sequels all have a common formula: forget about the very profession that enticed viewers in the original and insert as many love lines as humanly possible. Triumph in the Skies 2 follows this to the word. First, there’s the Isaac-Summer-Josie-Teddy rectangle. Then there’s the love not-sure-what-shape with Sam/Holiday/Zoe/Daniel/Jayden. And don’t forget the whole Heather/Roy/Tony/Mr. King pyramid. We’re learning more about geometry than aviation.

The original series was heavily focused on romance as well, but the problem with the sequel is: one, the imbalance between love and work and two, the ill-development of the love lines. Many things were missing, such as how Sam falls in love with Holiday or the cause in Jayden’s character change. 42 episodes is a long time; there should be no need to rush at the end. Too much time was wasted on irrelevant things (Eliza’s mom, anyone?), such that development of the main characters was stunted. Still, Triumph in the Skies 2 is the highest rating drama of 2013, so there must be reasons for its success. There’s the nostalgia from the original and watching how the characters have grown up. Surely, the actors themselves have matured and it’s great to see the chemistry amongst the cast working together again ten years later. The series is light-hearted with no evil, back-stabbing, scheming sort of stuff. There’s the hot, steamy, sexy sort of stuff, but of course, we’re talking TVB here. There’s also a fair share of tear-jerking moments that will probably make you cry more than Fala. There’s laugh-out-loud moments, what-the-heck moments and many I’ll-never-fly-in-a-plane-again moments.

All in all, a series to laugh, cry, relax and enjoy, and before you know it, it’ll be end and you will realize it has been a wonderful journey after all.

94 comments to Review: “Triumph in the Skies 2” (by Miriamfanz)