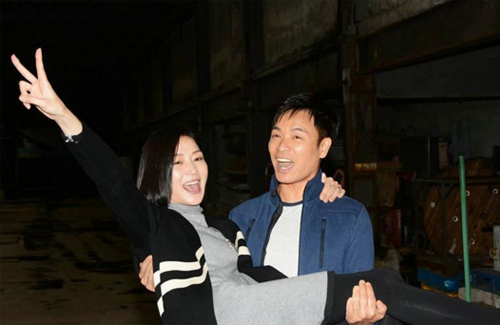 Roger Kwok (郭晉安) and Joey Meng (萬綺雯) plays a pair of ex-lovers in new suspense thriller Dead Wrong <致命復活>, which is currently in its last phase of filming.

Having incurred some injuries during previous productions, Roger explained that he had to be especially careful when carrying Joey out from a fire scene in the new series. In the scene, Joey’s husband Kenny Wong (黃德斌) went on a rampage, knocking out Ma Ka Lun’s (麥嘉倫) character, and started a fire that eventually resulted in Joey’s miscarriage.

Not only is the series physically demanding for Roger and Joey, who had to participate in numerous action scenes, but Kenny had to also endure many brutal fight scenes with his enemies. In one scene, Kenny’s character was nearly beaten to death due to an altercation.

While lifting Joey into his arms for the scene, Roger said he had to be especially careful as he did not want to agitate Joey’s old injury.

Heading off to Vietnam for a couple of outdoors scenes, Roger is not worried about how unwelcoming the country is to the Chinese. In fact, Roger revealed that many locals offered their support when they heard that TVB’s production crew would be filming in their country.