The couple appeared loving as ever at a family gathering.

Since Ruby Lin (林心如) and Wallace Huo (霍建华) were spotted arguing openly on the streets last month, the couple’s every move became the center of attention. From Ruby deleting a photo of herself and her husband from her social media to Wallace living alone in their house, netizens read these signs as cracks in their marriage.

However, photos of the couple at a recent family event, Ruby’s father’s 70th birthday celebration, put rumors of their marital unhappiness to rest, as Wallace was seen hugging his wife in a sweet pose in one photo, proving that their relationship was not damaged by their public spat.

Not only have they made up, the couple also appeared to share a great relationship with their respective in-laws, as seen from Wallace belting out tunes at his father-in-law’s birthday celebration and also hugging Ruby’s mom tightly as he sang onstage. Ruby, too, invited her mother-in-law onstage to indulge in the jovial atmosphere, proving their good ties.

In an affectionate display, Wallace even chose a song with lyrics which had Ruby’s Chinese name in it as the two held hands throughout. While Wallace sang before the crowd, Ruby gyrated to his singing. Standing some distance away from the stage, Ruby started swaying along with a wine glass in hand, looking svelte in her black leather pants and booties. Under the influence of alcohol, she half-danced, half-walked to Wallace and began bending her knees in a “drop low” pose, showing off her moves in the presence of family and relatives. She then leaned on her husband’s shoulder sweetly, while Wallace stroked her hair, putting rumors of the couple’s discord to rest. 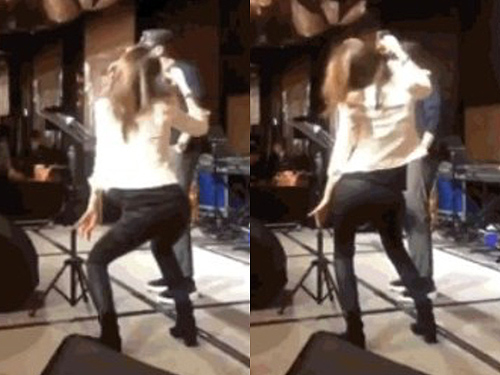