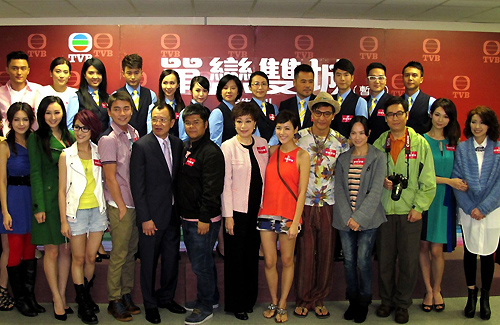 After portraying lovers in Ruse of Engagement <叛逃> and starring together in Love Exceeds the Coastline <情越海岸線>, Ruco and Aimee will be caught in a complex love rectangle involving Lin Xia Wei (林夏薇) and Elaine Yiu (姚子羚). Ruco’s character will be a flirtatious player whom women can’t help but fall for his charms.

In the sales presentation unveiled earlier, Aimee and Xia Wei are Hong Kong tourists that become fast friends while staying at the same Malaysian resort. Both women have been suffering frustrations with their current boyfriend. As they exchange their relationship stories, “Ben” walks towards the beach and they realize that they are both in love with the same man!

Unrequited Love Double Cities will film on location in Malaysia, featuring the colorful local landmarks and sunny beaches. Ruco’s character is a tour guide in Malaysia and also a music producer. Will Ruco intentionally show off his muscles in the beach scenes? “I will not especially do so. But I’m trying to diet now. My schedule is too busy, so I will exercise more later. Hopefully, there will be something to see!”