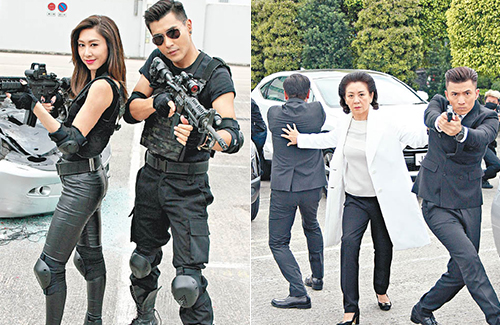 The cast of The Alliance <同盟> filmed a shootout scene at the front of TVB City studios this past weekend. The sequence was especially filmed for the drama’s sales presentation trailer, which will be shown in November.

The TVB drama, produced by Jazz Boon (文偉鴻), centers on a modern Hong Kong crime family. The action-packed show brings back the action crew of A Fist Within Four Walls <城寨英雄>, hoping to continue the success of kung fu dramas.

Looking like a pair of professional secret agents, Ruco Chan (陳展鵬) and Nancy Wu (胡定欣) showed no awkwardness when they shot their action sequence. They even chatted about their assault rifles, in which Nancy used for the first time. The drama’s other main pair, Joel Chan (陳山聰) and Elaine Yiu (姚子羚), went for a classier look with a suit and ball gown.

Nearly 90 percent of Nancy’s scenes will be with Ruco. The rumored pair will share many intimate scenes together on the show, including a sequence that will involve them doing close-combat fighting. “We already shot a small part of that,” said Ruco. “That was when I injured myself,” Nancy added with a laugh.

A few weeks ago, Nancy sprained her ankle while attempting to do a stunt with Ruco. She had to be briefly hospitalized. Nancy said she hasn’t filmed an action scene since the incident, as the crew wanted her ankle to heal first.

Asking if their dating rumor had affected their work relationship, Nancy said, “Of course not. We need to have great chemistry with each other in order to film a scene like that anyways.”

Paw Hee-ching (鮑起靜), who stars on the show as Ruco’s mother, also had to do her own action sequences. At the sales presentation filming, the veteran actress opened fire with her gun while she was being protected by Joel Chan and Jimmy Au (歐瑞偉).

“It’s tiring,” the actress admitted. “I also had to wear three-inch heels. I haven’t worn such high heels in a long time, but the look is great!”