With a bevy of artistes bidding adieu to TVB in recent years, actress Samantha Ko (高海寧) might be the next familiar face to leave, according to rumors!

Since completing her filming duties in mainland China, Samantha has not appeared on Hong Kong television until a recent episode of variety gameshow Super Trio Returns <開心無敵獎門人>. The 35-year-old shared that she has been learning swimming from an old friend, and is enjoying herself tremendously as she took part in classes with young kids, who have impacted her with their infectious happiness. 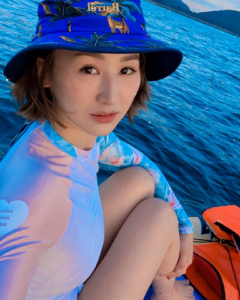 ‘No’ to Contract Exchange for Award
Asked about rumors that she will not renew her contract with TVB, Samantha replied that she is still pondering her options at the moment and actively engaged in talks with the station.

Keen to further her acting abilities rather than stagnating, the Miss Hong Kong alumna elaborated, “I really want to have a representative drama, good roles and co-stars…of course, having acted for so many years there’re many dramas I love, but I have to think hard about how to become better (from here),”

Adding that acting classes are on the horizon for her, Samantha said, “I (she) really enjoy (acting) and want to push myself more in this field,”

Rejecting the notion that she will renew her contract in exchange for a TV Queen or Best Supporting Actress title, she replied, “I hope to have a role that can win viewers’ approval, (that) will give more meaning to an award, so I’ll never do such a thing…it’d be meaningless, even if I did,”

Keen for Breakthrough Roles for Viewer Approval
Since inking her first contract after placing fifth in the 2008 Miss Hong Kong pageant, Samantha has been with TVB for 14 years. Known for her sexy voluptuous figure, she began to be recognized for her acting in recent years, and nailed praise for her role in 2020 C-drama Nothing But Thirty <三十而已>, which opened doors for her in the mainland market.

“Even if it’s just a few scenes, viewers recall that I’ve done well,” said Samantha, who is keen to take on similar noteworthy roles. Rising in popularity in mainland China, the Nanjing-born artiste currently has 1.48 million fans on social platform Weibo.

Denying that she was leaving to earn more in Chinese market, where wages are known to be much higher for established artistes than in Hong Kong, she said, “No…if my co-star is Sean Lau Ching-wan (劉青雲), I can film without taking a single cent!” she said.