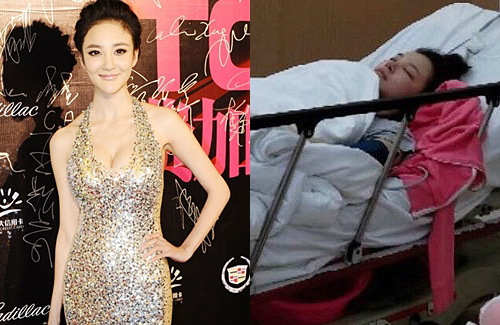 Scarlet Heart <步步惊心>actress Liu Yuxin (劉雨欣) was was suspected to have attempted suicide. Posting photos of her hospitalization, Yuxin’s ambiguous response added to the speculation that she had tried to end her life.

When concerned fans asked whether she was okay, Yuxin said she drank a glass of alcohol which made her believe she would never awake from. She further added that she wanted to continue sleeping on. She wrote, “After one big circle, the heavens won’t have me!” Due to the puzzling posts and underlying hints of suicidal thoughts, fans believe that she may have attempted suicide.

Fans are presuming that her suicidal thoughts stem from the messy relationship with her ex-husband, Li Meng (李蒙). The couple married in 2009, but divorced in 2012 due to Li Meng’s extramarital affair with 29-year-old Mainland actress, Zhang Mang (張檬). Since then, Yuxin exhibited moments of depression and moodiness, often writing gloomy posts on social media.

To quell the gossip, Liu Yuxin clarified on Weibo today and wrote, “Everything that has happened is all because of me. It has nothing to do with anyone. Please do not continue hurting other people.” However, she admitted that she takes sleeping medication in order to help her sleep.