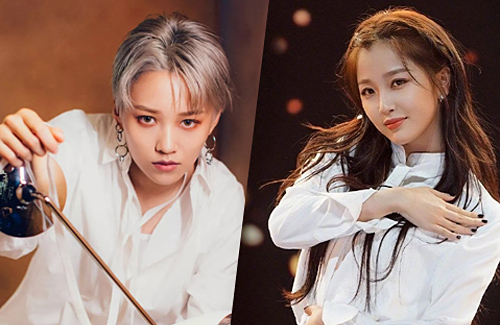 After three months of intense competition, the latest season of hit Chinese pop survival program Youth with You 2 <青春有你2> is set to unveil two competing camps with 10 trainees each, who will undergo elimination to leave just nine finalists debuting as singers.

Vastly Different Styles on Both Teams

The appearance of Cai Xukun (蔡徐坤), Blackpink member Lisa, and others as professional coaches providing guidance to the trainees attracted many viewers to the show. With 15 trainees eliminated so far and the date of their official debut getting closer, online sources have spilled the grouping of the remaining trainees, with Liu Yuxin (劉雨昕) leading Team Purple and Esther Yu (虞書欣) leading Team Pink.

In the previous episode, Liu Yuxin surpassed Esther in the rankings, who has consistently taken the number one spot. Both outstanding performers, they have vastly different styles and have hardly chosen the same songs . Viewers grew excited about a possible face-off in the finals.

Team Purple which include Yan Yu (喻言), Xie Keyin (謝可寅) and others have so far showed off cooler stage effects while Team Pink, led by Esther with Xu Jiaqi (許佳琪), Babymonster An (安崎) and others are better suited to a sweet performing style. If they were to cooperate on the same song, their styles would therefore be vastly different.

While the official lineups have yet to be announced, many are already excited about what will come out of the fresh grouping.

Liu Yuxin in “Youth With You 2”

Esther Yu in “Youth With You 2”

Cai Xukun Talks About His Struggles

Kris Wu’s Once Rumored Girlfriend Competes in “Youth with You”

3 comments to “Youth with You 2” Splits into Two Camps