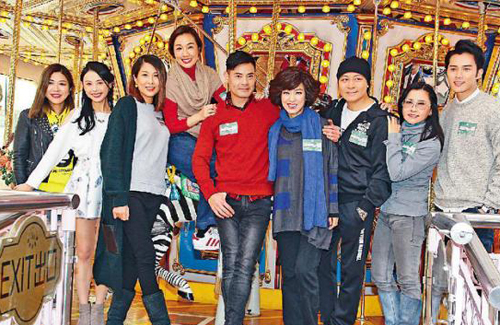 After giving birth in December, Sharon Chan (陳敏之) is back to work and attended her first event yesterday. Sharon has not completely lost her baby weight and appeared curvier at the promotion for new TVB drama, Tiger Mom Blues <親親我好媽>.

Sharon enthusiastically talked about the first month with her newborn son. Sharon expressed, “Taking care of a baby is a lot of work and there are so many new things to learn. My son has grown a lot bigger and his chin looks like a little shrimp dumpling. He’s a dozen or so pounds now and his body is very long. We call him ‘Long Boy’! Although I’ve only stepped out for a little while, I’m already missing him. If I’m filming, my family will help take care of him.”

Asked if she is currently breastfeeding, Sharon said, “Yes! It’s a lot of work, but it’s worth it in the end. Moms are really selfless – even when they’re sleepy, they’ll still feed the baby.”

Tired due to having to look after her baby, Sharon admitted that she has been very forgetful after giving birth. Often times, she would forget to bring something and would only realize after leaving the house. However, Sharon does not worry too much and believes her memory will improve after she starts filming again.

Airing on February 6, Tiger Mom Blues also stars Ben Wong (黃智賢) and Elena Kong (江美儀). On ratings possibly being affected due to the holiday season, Ben shrugged, “The series start airing on the tenth day of the Lunar New Year; everyone should be off holiday mode already. Besides, the series is centered on families and education – it’s very relatable so I believe parents can sympathize when they watch.”