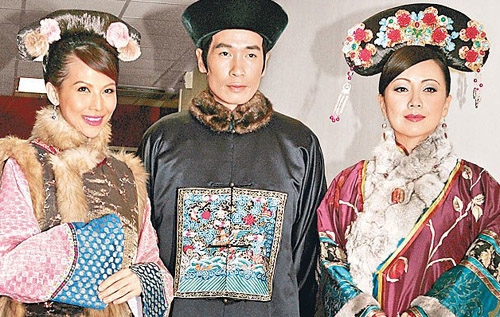 Eight years ago when Sheren Tang (鄧萃雯) had filmed TVB drama, War and Beauty <金枝慾孽>, she was treated as transparent by the media, who regarded the other cast members, Gigi Lai (黎姿), Maggie Cheung (張可頤), and Charmaine Sheh (佘詩曼) with greater importance. Reporters had even attempted to crop Sheren out of the photographs.  After the series was broadcast, Sheren’s popularity skyrocketed, bringing her fame and fortune.  Experiencing various peaks and valleys in her career to-date, Sheren looked past money and focused on achieving ideals and meaning in her life instead.

It was understood that War and Beauty 2 will not continue the plot of the first installment, despite Sheren’s character name remaining “Yue Fei.” In the sequel, Sheren’s character was quite weak in the beginning of the series, before strengthening to defend herself against Christine Ng ( 伍詠薇). Sheren lost favor with the emperor, thus spent her time enjoying Chinese opera and falling for opera star, Moses Chan ( 陳豪), who was also romantically involved with Alice Chan (陳煒). Sheren’s younger sister, Christine Ng, took the opportunity to hire an assassin to kill Alice and incriminate Sheren.

Ada Choi (蔡少芬) will portray a nanny who also serviced Sheren as a maid. Thus, Ada understood the secrets between Sheren and Christine. When Ada fell for court warden, Kenny Wong (黃德斌), she had to counter against Christine Ng’s machinations.

A highly sought after actress, Sheren turned down numerous money making opportunities in mainland China in order to reprise her role as “Yue Fei” in War and Beauty 2. Sheren admonished the recent trend in news reporting where money was often linked to various topics, including the focus on artist filming fees. As reported by Ming Pao, Sheren stated, “It appears that everyone is just interested in material gains. In school, we were taught to have dreams, principles, and not just look at money. It was important to be a good person, use our intelligence and reflect upon life. These were the things to chase after.”

Since the market in mainland China was vast, the filming fees were a lot higher than in Hong Kong. Sheren stated, “Is an artist’s passion being obliterated?” It turned out that Sheren had turned down various palace dramas due to similar material resembling War and Beauty 2, as well as potential schedule conflicts. The actress looked forward to working with another passionate talent, Producer Jonathan Chik (戚其义).