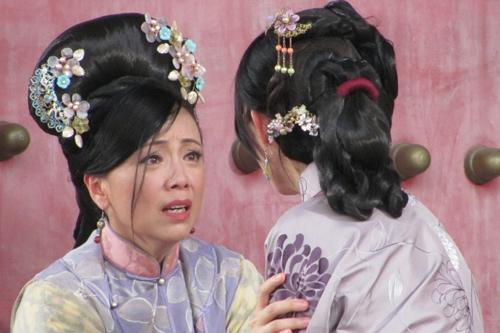 Sheren Tang (鄧萃雯) was blacklisted by TVB when she criticized Hong Kong’s top television station in public. Affected by the poor reception received by her last drama Beauty at War <金枝慾孽貳>, Sheren publicly chided TVB’s management and expressed her displeasure at Beauty at War’s poor filming conditions and problematic script. Her criticism led to a fiery exchange between her and Beauty at War’s scriptwriter Chow Yuk Ming (周旭明).

However, it turns out that not only was Sheren upset during the filming of Beauty at War, she also apparently still held a grudge against Gigi Lai’s (黎姿) Best Actress win in 2004.

Last month, Sheren attended a Christian sermon in Vancouver, Canada, as a guest speaker. In her presentation, she spoke about all her insecurities and troubles as a television actress in Hong Kong. She mentioned Beauty at War’s flawed script, TVB’s bigoted casting practices, and her belated Best Actress wins at the TVB Anniversary Awards.

Sheren expressed, “Holding a flawed script in hand, I didn’t know what dialogue I should speak. I just blindly memorized my lines every day. Isn’t that insane? It was to the point where I couldn’t even act to my full potential!”

In 2003, Sheren was cast in the idol drama Aqua Heroes <戀愛自由式>, starring as BoBo Chan (陳文媛) and Leila Tong’s (唐寧) mother. Sheren implied that the role was a miscast.

“Being an actress is quite pitiful. [I was] in my thirties and still considered a pretty girl, but yet they tell you to play a mom, and it has to be the mom of Bobo Chan and Leila Tong. How could I give birth to them?”

Sheren added, “I really lost some hope at the time. Since debut, I’ve always played lead characters…. Once, a group of teenagers came up to me and called me ‘auntie’. That was the lowest point of my acting career, but I still went with the flow. If I didn’t do it, I would have no jobs.”

On speaking about winning Best Actress at the TVB Anniversary Awards, Sheren hinted at her bitterness towards Gigi Lai’s 2004 Best Actress win. Both Sheren and Gigi, stars of the super-hit War and Beauty, were popular contenders for Best Actress, but Sheren was ultimately defeated.

Sheren said, “I always felt like I was a capable actress. I had the skills and enough experience. I wasn’t willing to concede. Why did all the juniors win the award before I did?”