ViuTV’s new drama on cheating and marriage issues, Till Death Do Us Part <婚內情>, was aptly broadcasted on April 29 following Andy Hui (許志安) and Jacqueline Wong‘s (黃心穎) explosive cheating scandal. Perhaps the audience can find similarities between the incident and the drama’s storyline, in which Hedwig Tam (談善言) enters Sheren Tang (鄧萃雯) and Sunny Chan‘s (陳錦鴻) marriage of 20 years as the third party.

Like Sammi Cheng (鄭秀文) and Andy, Sheren and Sunny seemed like the model couple. They became acquaintances, got to know each other, fell in love, and then got married. The two were not only lovers but also work partners – Sheren runs a gallery while Sunny is a romance novelist. However, with the passing time, the beautiful fireworks disappeared and their passionate love became dull. Now the pair is more like family members rather than lovers – allowing room for a third party to intervene.

Undoubtedly, Hedwig’s appearance causes a rift between the couple. She’s one of the few people in Sunny’s world to dismiss society’s traditional framework. For example, one can tell she’s a maverick by the way she signed the Chinese funeral sympathy flower with an artwork instead of her signature. Although it is uncertain whether Sunny really likes Hedwig, it’s no secret Sunny has lived under the control of Sheren and he’s ready to break free of her constraints – like a student rebelling against the teacher. Instead of saying that he is succumbing to seduction, you can say that Sunny is ready to explore a new world outside of his marriage.

Once a third party enters a marriage or relationship, many people will choose to end it. Even if the unfaithful is forgiven, the relationship will never be the same. However, in the series, Sheren unexpectedly accepts the mistress’ existence. Perhaps she is using the third party as a tool to maintain her marriage or maybe there are other reasons. 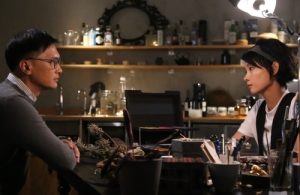