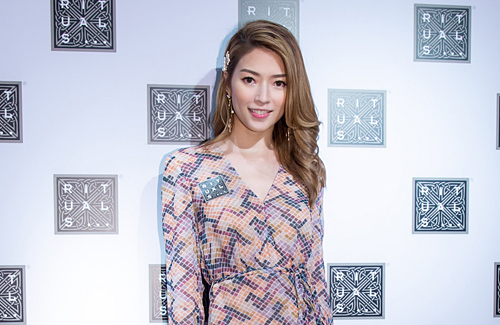 Shiga Lin (連詩雅) made an appearance for a lifestyle brand’s grand opening earlier. Currently busy preparing for her role in Line Walker 3 <使徒行者3>, she will be reprising her role as Ah Luen, an undercover police who appears in Thailand in the previous installment.

Most of Shiga’s scenes revolve around trying to seduce Benjamin Yuen (袁偉豪) in hopes that he would give her intelligence data. She will have to wear a figure-hugging dress and is focusing on keeping fit. She will also pay attention to her diet the week before filming so that she can look her best onscreen. Unfortunately, Shiga confirmed that her character’s death in the previous installment was indeed real and she will only be filming flashback scenes.

When asked if she was worried that her role would not be accepted due to the increasing tensions between the police and public in Hong Kong, Shiga responded, “I believe that the audience are clear minded and able to differentiate that my role is just a character in a story. As well, the drama is still in the process of filming so it probably won’t be broadcast until the latter half of next year. Hopefully at that time, the situation would have calmed down.”