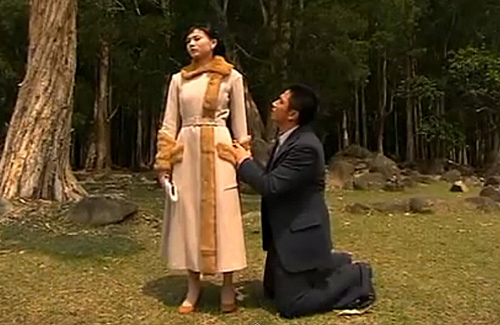 The two-hour finale of TVB drama, Silver Spoon, Sterling Shackles <名媛望族>, was broadcast on Friday evening. The cast gathered at Metro City Plaza yesterday to watch the finale with the audience, in hopes of pulling up the viewership ratings. Throughout the dramatic 82-minute finale, the male characters begged on their knees for forgiveness from their loved ones for a total of seven times.

Near the beginning of the episode, barrister Arthur Chung (Damian Lau 劉松仁) kneels down and asks for forgiveness from his first wife, Koo Sam Lan (Mary Hon 韓馬利) before her death. He realizes that he was ignorant towards her feelings and needs in past years. He sadly thanks her for putting up with the many times he had hurt her.

A later scene involves Kam Muk Shui (Ron Ng 吴卓羲) chasing Kwai Siu Yau (Rebecca Zhu 朱晨麗) in a forest, planning to kill her when she refuses to leave with him. When he realizes how much Siu Yau suffered because of him, he kneels and asks for her forgiveness. Kam Muk Shui finally accepts that their relationship has come to an end. He agrees to leave her alone, as long as she finds happiness. Siu Yau decides to leave the Chung household and start a new life with her sister, Kwai Siu Yu (Bella Lam 林穎彤).

After the death of Sam Lan, Arthur’s second son, Jimmy Chung (Vincent Wong 王浩信) kneels and bows outside the gates of their household. Too ashamed to enter the house, he asks for forgiveness and feels sorry about being such an unfilial son. With the help of Hong Tze Kwan (Tavia Yeung 楊怡), he reunites with his pregnant lover, Choi Yuet (Charmaine Li 李思欣) and kneels for her forgiveness in trying to kill their baby. He promises that he will never harm her again. Jimmy then returns to the Chung household and kneels in front of his father for forgiveness for his past faults. He and Choi Yuet end up in a happy marriage.

In the last scene of the finale, Arthur and Tze Kwan meet in a church in Shanghai. To Tze Kwan’s surprise, Arthur kneels in front of her and asks if she would like to marry him a second time. She reminisces the time Arthur knelt in front of her in a ballroom for his first marriage proposal. Tze Kwan happily accepts, and the two reunite as a loving couple.

Forgiveness was begged for in the most melodramatic fashion and amends finally made amongst broken hearts.