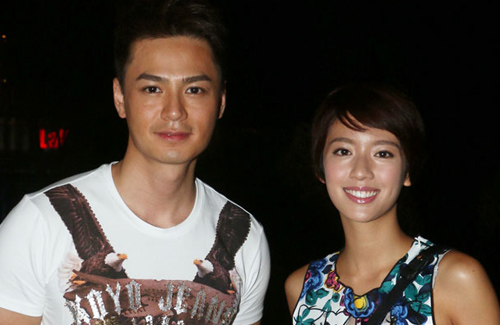 Although it has only been one year since Sisley Choi (蔡思貝) won first runner-up in Miss Hong Kong 2013, she had been heavily promoted and romantically linked with her co-stars. Currently filming her third drama, Cross the Finish Line <衝線>, Sisley is reportedly actively pursuing Him Law (羅仲謙).

Although Him is currently dating Tavia Yeung (楊怡), Sisley did not hold back her interest in Him. Sisley deliberately initiated conversations with Him on the set, and would wait for Him after work ended, often inviting the actor to late night snacks. Initially, Him rejected Sisley’s offers, but eventually he began caving due to Sisley’s continual persistence.

Not afraid of garnering negative gossip, Sisley openly praised Him, “He is very nice and talkative. We got along very quickly!”

Many cast and crew members noticed Sisley behaved differently towards Him versus other male actors. When Him was not on set, Sisley would be aloof and nonchalant. However, when Him arrived, Sisley immediately exhibited a much friendlier attitude. When Him was filming a bike-riding scene, Sisley would be on the side, constantly cheering him on.

Some members of Cross the Finish Line spoke to Sisley about her inappropriate behavior towards Him since he is attached. Growing up in Germany, Sisley is known for her blunt personality. Sisley refuted, “I know that [Him and Tavia are dating]! But so what? They’re not married, and even if they are, so what?”

Sisley and Him are going to Taipei to film on location for the drama. But Him shared that there are no intimate scenes between them, “We only hug and hold hands. Even kissing is lacking. This is a youthful drama without passionate kissing and bed scenes.”

Him complimented Sisley, “She is very smart. Although she has only filmed three dramas, her thoughts and attitude resemble an artiste who has been in the industry for five to six years. I have a very high opinion of her.”