Sisley recalled feeling awestruck on set, “When I filmed my scenes with Raymond, I felt nervous and excited! Raymond really is too handsome and cool. It took me some time in the beginning to get over my shyness around him. It was very easy and quick though, because he is a very nice person. I feel very fortunate to have the opportunity to film with Raymond. Perhaps when I re-watch this drama in 10 years, I would still be in awe that I got to film with him.” 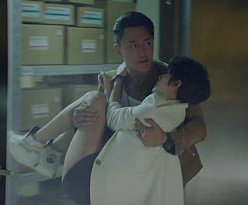 In the first 10 episodes of Line Walker: Bull Fight, Sisley has several physical scenes with Raymond. When both were locked in a freezer, Raymond hugged her to give her body warmth and eventually carried her outside after making their escape. In another scene where Sisley gets a gunshot wound, Raymond rushes to her side to aid her.

Though Sisley shares numerous scenes with Raymond, her character has a romantic arc with Owen Cheung. It was easy for Sisley and Owen to create sparks on the set of Line Walker: Bull Fight  since they became good friends after Legal Mavericks <踩過界>. Asked whether it was awkward for the two friends to portray lovers, Sisley responded, “Although we are compatible, we have only collaborated in dramas as good friends. This time, we portray lovers. The filming experience was definitely memorable. When I faced Owen on screen, I did feel shy! During filming, we made sure to stay distanced from each other, whether it was during makeup or preparations. Since we are so familiar with each other, we were worried we would be unable to portray feelings of romantic love. I wanted to grasp the feeling of being shy or beautiful in his eyes.”

After an early release on myTV Super,  Line Walker: Bull Fight will be airing on TVB on November 9, 2020.