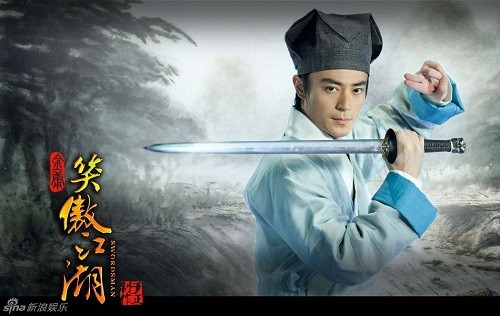 One of mainland China’s most successful television producers, Yu Zheng’s (于正) Swordsman <笑傲江湖> started filming on March 24th. The Chinese drama was the latest adaptation of Jin Yong’s (金庸) martial arts novel, The Smiling, Proud Wanderer. With a cast of Wallace Huo (霍建华) as Ling Hu Chong, Yuan Shanshan (袁姗姗) as Ren Ying Ying, Yang Rong (杨蓉) as Yue Ling Shan, Chen Xiao (陈晓) as Lin Ping Zi, and  Joe Chen (陈乔恩) as Dong Fang Bu Bai,  Swordsman has been accused of being an idol drama by the online community! However, Yu Zheng maintained that his remake will be one of the most loyal adapatations of Jing Yong’s novel, while expanding upon the romantic elements. While Wallace Huo’s handsome features were largely praised as befitting Ling Hu Chong, some netizens were quick to point out Wallace’s past melancholic onscreen personas.  One netizen stated, “Although Wallace Huo is very handsome, I do not wish to see an expressionless and unemotional performance….” This may not be a problem as Yu Zheng revealed that Ling Hu Chong will be a well-fleshed and vivid character, with ample opportunity to emote.

Swordsman will be a fast-paced drama, utilizing special effects to depict the fantastic wuxia world. The new adapatation will also focus heavily on romantic elements, in which Ling Hu Chong will possess an unforgettable love towards Yue Ling Shan, while Ren Ying Ying  will love him deeply. Perhaps the most outrageous casting in Swordsman was Taiwanese actress, Joe Chen, as the androgynous martial artist, Dongfang Bubai, which resulted in the strongest reaction from netizens.  Appearing in many idol dramas, Joe Chen often had a cute and well-behaved image. Upon the casting of Joe Chen, Netizens exclaimed  “Oh heavens, it turned out that Yu Zheng is filming an idol drama!” Others noted that the curvaeous Joe did not possess the appropriate coldness for the role. Yu Zheng defended his casting choice, stating that when Joe Chen appeared in the Swordsman as a woman, his true identity as the castrated Dongfong Bubai was not discovered until later.

The casting of Chen Xiao as Lin Ping Zhi and Yang Rong as Yue Ling Shan was met with overall approval, due to their physical attributes found suitable to portray the tragic lovers.

Swordsman will mark Yu Zheng’s first foray into the wuxia genre, a marked departure from his trademark “scheming palace ladies” genre in the past. Despite the online community questioning Yu Zheng’s casting choices for certain characters, he promised to remain loyal to the novel and only add supplementary details. The drama was currently filming in Xiandu and will be completed in July 2012, upon which it will be aired on Hunan TV station in China later this year. Jayne: Swordsman will be a feast for the eyes in several ways, mainly the casting of Wallace Huo as Ling Hu Chong. Jacky Lui gave a very credible performance in the past; he was able to convey the carefree characteristics of the character quite well.