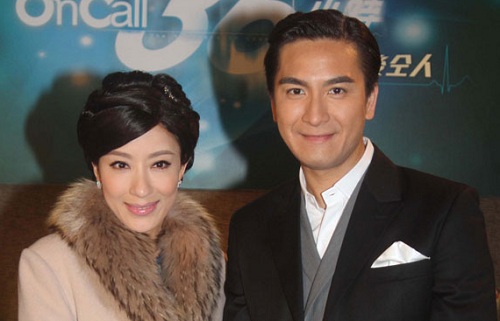 Kenneth Ma’s (馬國明) popularity increased significantly since portraying a handsome doctor in Hong Kong TVB drama, The Hippocratic Crush <On Call 36小時>. Kenneth even climbed into Next Magazine’s Top 10 Television Actors list. With more invitations from advertisers to appear at promotional events, Kenneth also felt the pressure to dress appropriately for the occasion.

Known for wearing T-shirts and jeans on his days off, Kenneth knew that his casual preferences may not be suitable for more prominent public appearances. He turned to The Hippocratic Crush costar, Tavia Yeung (楊怡), for tips on how to improve his fashion sense.

At a cast and crew dinner celebrating the success of The Hippocratic Crush, Tavia revealed, “He (Kenneth) said that he has everything, including good acting skills. He only lacked taste!” Asked why she felt that Kenneth lacked taste, Tavia replied, “It’s his fashion sense. He has to change his image. As his friend, I am only pointing it out to him and not putting him down!”

Kenneth and Tavia will have the ability to collaborate again in an upcoming sequel for The Hippocratic Crush, which may shoot at the end of this year or early 2013. Kenneth had joked earlier that he hoped to continue to film numerous chapters of The Hippocratic Crush, similar to how Healing Hands <妙手仁心> had spawned three installments.

Happy with the new money-making opportunities that his recent popularity brought, Kenneth stated that he was interested in buying a large home to live with his family. “I hope there are cash rewards. The housing prices are very expensive right now; I do not have enough money yet!” Asked whether he will be hiding a woman at his new house, Kenneth said, “If I were to have a lot of money, I do not mind!”

Jayne: Finally, Kenneth is interested in changing his image a bit. It is about time he dressed more like the heart throb that he is! He needs a good haircut too. He should ask his good brother, Kevin Cheng, for advice. Among TVB actors, Kevin and Moses have sensible fashion sense and look good in almost everything they wear.