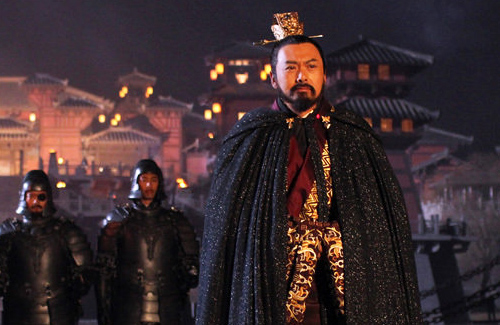 The first movie of a planned trilogy, The Assassins is a fictional retelling of Cao Cao’s mysterious death. All of the characters in film only have one mission: to kill Cao Cao. With the slogan “Love, Lust, Power, Plot,” the characters in the film have different purposes to murder the great warlord. Kill by Love: Lingju (Crystal Liu 刘亦菲) and Mu Shun (Tamaki Hiroshi 玉木宏) are a pair of young lovers who spent half of their lifetime in a hidden tomb training to be assassins to kill Cao Cao. Lingju, Mu Shun, and Cao Cao later develop an ambiguous triangle relationship, in which the couple’s lifetime goal of assassinating Cao Cao becomes inhibited.

Kill by Lust: Cao Cao’s eldest son, General Cao Pi (Terry Chiu 邱心志) lusts for Emperor Xian’s (Alec Su 蘇有朋) beautiful wife, Empress Fu Shou (Annie Yi 伊能靜). Living under the shadows of Cao Cao, the empress has no choice but to use seduction to protect herself and her family.

Kill by Power: With Cao Cao increasing in power, Emperor Xian is nothing but a puppet monarch. Without real power in his hands, he spends his days searching for pleasures and entertainment instead. But he secretly harbors intentions to kill Cao Cao and to retrieve the power that truly belongs to him.

Kill by Plot: To protect his position in court and his daughter’s hold as empress, powerful Han official Fu Wan (Ni Dahong 倪大宏) comes with a plot to assassinate Cao Cao, who now has only his personal physician Ji (Yao Lu 姚橹), to trust.

The Assassins will be released in theaters in China in September.

Watch the Trailer of “The Assassins”

11 comments to “The Assassins” Plot to Kill Chow Yun Fat