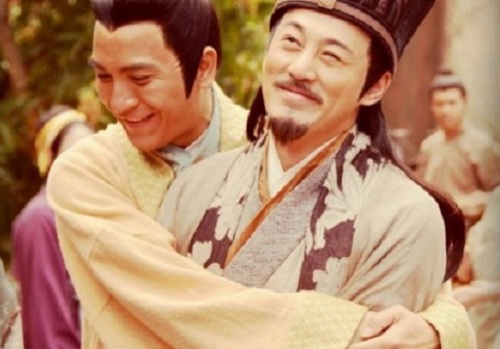 TVB dramas received miraculous television ratings 2 days ago due to Typhoon Vicente lashing through Hong Kong. Typhoon Vicente was raised to a level 10 cyclone signal for several hours, which made it one of the strongest typhoons to hit Hong Kong in the last decade. Residents rushed home for safety and turned on their television sets, pushing the ratings of Three Kingdoms RPG <回到三國>to skyrocket at 42 points!

As the strong winds and heavy downpours blasted through Hong Kong, schools and offices were closed early. Millions of residents sought comfort in their favorite local celebrities, gluing to their television sets for a 5-hour TVB marathon!

Three Kingdoms RPG, which aired in the 8:30 PM time slot, benefitted the most from Typhoon Vicente. Starring Kenneth Ma (馬國明), , Raymond Lam (林峯), and Tavia Yeung (楊怡), the drama’s ratings hit a record high of 42 points, with 2.69 million viewers tuning in, which marked it as the highest rating ever since its broadcast.

It is coincidental that in Three Kingdoms RPG, Sima Shun (played by Kenneth Ma) was transported back to the periodic era due to a typhoon. It is also more interesting that Kenneth Ma’s English name in the drama, Vincent Sima, bears close resemblance to Typhoon Vicente as well!

The typhoon caused a power disruption and many areas in New Territories were unable to receive signals to watch TVB programming. Electricity was cut off at around 9 PM from the power generating stations at Castle Peak and Cloudy Hill areas. Power generation did not resume until 2 PM yesterday. Hence, Witness Insecurity’s ratings were negatively impacted.

At the peak of the typhoon, TVB received many viewers’ complaints that they were not unable to receive the signal to watch Witness Insecurity.  It was unfortunate that Witness Insecurity which was scheduled at 9.30 pm was hit by the power disruption. The former TVB ratings champion among currently aired dramas, Witness Insecurity lost out to Three Kingdoms RPG.

TVB sitcom, Come Home Love <愛．回家> has been averaged sluggish ratings of only 20 points since its broadcast. However, Typhoon Vicente swirled up the ratings to 38 points, attracting 2.43 million viewers!

TVB entertainment news program, The Scoop <東張西望> was also devoured by local audiences.  Averaging 34 points, there were 2.18 million viewers who took the opportunity to catch up on the latest celebrity gossip.