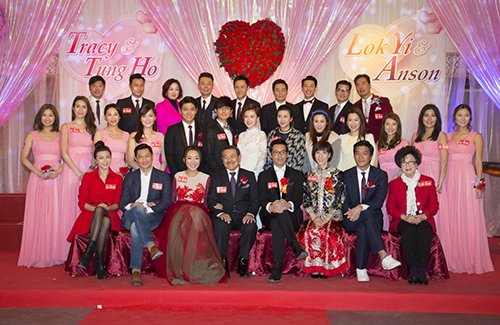 The first and second generation cast members of TVB’s sitcom Come Home Love <愛·回家> have shot the series’ final scene. The sitcom, a story centering on a modern Hong Kong family and their friends, is slated to air its 995th and final episode on April 1, 2016. Angel Chiang, who has been part of the Ma family for four years, described her feelings as “complicated” when she was asked about how she felt while shooting the wedding scene. From being a university graduate to a newlywed bride, Angel said the cast has literally watched her grow throughout the show. She said she would keep in touch with the cast and plans to treat them to a meal once the project is over.

Katy Kung, who did not join the sitcom until its second series, was teary-eyed while shooting the wedding scene. “I hugged James Ng Yip-kwan (吳業坤) and Owen Cheung a lot. The series is almost done, and it’s difficult for all of us to say goodbye.”

Although the show ends with a happy note, Katy was unfortunately sick with a fever while doing her final scenes. “39 °C. I had to go to the hospital yesterday and received over ten shots. I’ve never gotten this sick while working before.”

Lead actor Lau Dan (劉丹) said his character, Ma Fu, has lived a full life in Come Home Love—not only does he get to witness his granddaughter’s marriage, he also gets to be part of the early years of his great-granddaughter’s life. Everything has truly come full circle for Ma Fu.

While shooting the wedding scene, Lau Dan thought about his own real-life granddaughter “Little Sticky Rice.” He expressed that he will work hard to stay healthy so he can live to see the day of his granddaughter’s marriage.

When speaking about Little Sticky Rice, who will be turning two years old in June, Lau Dan happily shared that she is now old enough to say “grandpa.” He said with a huge smile, “Sometimes I’d ignore her on purpose just so I can hear her say ‘grandpa’ a few more times. She’s such a sweet girl and warms my heart!” Louis Cheung and Priscilla Wong return for the final episode.

Asking if Lau Dan has been urging son Hawick Lau (劉愷威) and daughter-in-law Yang Mi (楊冪) about having another child, Lau Dan said, “They have their own plans, so I will not pressure them. But of course, I’d definitely like another grandchild!”

On shooting the final episode, producer Law Chun-Ngok (羅鎮岳) said, “There is an end to everything. I took over this series halfway into its broadcast, and it’s been such a happy experience. Because many of our actors also have other jobs, it was hard to get them together to film this final shoot. I’m very happy to know that we managed to get most of them together.” Asking if the final episodes of Come Home Love would feature any other special storyline aside from the group wedding, the producer teased, “Actually, the wedding won’t be the final episode. On April Fool’s Day, we’ll be focusing on the series’ other female lead — the young and cute Ma Ka-ho will go missing.”