Tiffany Tang and Luo Jin Are Getting Married! 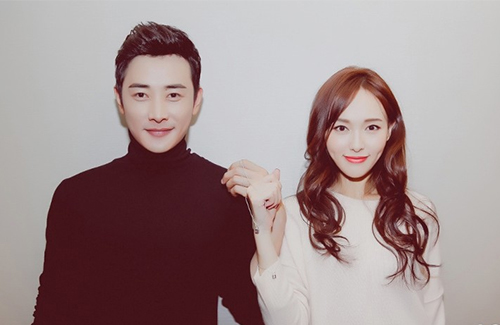 On December 6, 2016—the day of her 33rd birthday—Tiffany Tang (唐嫣) and Luo Jin (罗晋) confirmed their relationship to the world. There was a brief breakup scare earlier this year, when rumors broke out that Tiffany and Luo Jin were on the brink of splitting, but that quickly flew out the window.

Allegedly, Tiffany and Luo Jin have hired the designer who designed Hannah Quinlivan’s (昆凌) bridal gown. Though the netizen who originally broke the news immediately deleted the post, pictures of Tiffany’s gown resurfaced on the web, becoming a hot search. The couple also have allegedly purchased a new home for 30 million yuan.

Reporters reached out to Tiffany’s staff for comment. They denied the rumor of hiring Hannah’s bridal designer, but did not deny the news of a wedding this December. “We don’t know the details of her private life,” said the staff.

10 comments to Tiffany Tang and Luo Jin Are Getting Married!