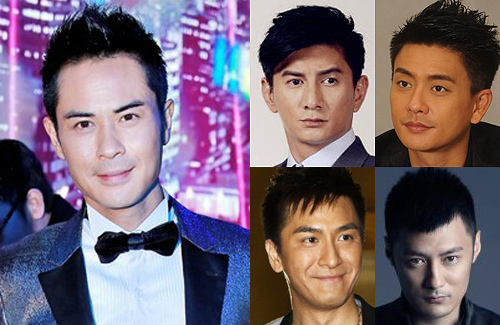 With Moses Chan’s (陳豪) marriage to Aimee Chan (陳茵媺) and with Raymond Lam (林峯) announcing his relationship with Karena Ng (吳千語) to the public, TVB eligible bachelors are shrinking in number. Fortunately, Kenneth Ma (馬國明), Bosco Wong (黃宗澤), and Kevin Cheng (鄭嘉穎) are still “on the market,” and it seems that many mainland Chinese actresses are very aware of that fact.

With more Hong Kong and Taiwanese actors expanding their acting careers to mainland China, many Chinese actresses are finding more opportunities to meet with actors of different cultural backgrounds. A tabloid magazine reported that some of these mainland Chinese actresses have been “sneaking their way in” to attract the attention of these bachelors, such as intruding the actors at their hotel rooms and finding excuses to exchange phone numbers.

A mainland Chinese actor, “Mr. C”, revealed that when Hong Kong actors are shooting in mainland China, their female costars will visit them in their hotel room nearly every night. Mr. C described that there would be different girls – ranging from leading actresses to background extras – visiting the Hong Kong actors at their hotel rooms on a nightly basis. Some actresses even dress provocatively. Mr. C witnessed one incident where a Hong Kong actor was afraid to open the door when he saw the actress dressed in a revealing outfit.

There was also another incident where a mainland Chinese actress forced a Hong Kong actor to give her his phone number. When he refused to give her his number, she grabbed his phone and used it to call her own phone; she then forced the actor to add her number in his address book. After obtaining his number, the actress sent text messages to the actor all day, and even sent some of her own intimate photos to him.

In addition, some actresses even bribed the Hong Kong actor’s personal assistant to get information on the actor’s schedule. Another actress pretended to feel sick during a company dinner so she could get the actor to notice her.

Shawn Yue (余文樂) returned to bachelorhood after breaking up with Kary Ng (吳雨霏), his girlfriend of one year. The 31-year-old admitted that he had experiences of mainland Chinese actresses trying to court him – when was staying at a hotel in mainland China, a girl dressed in a sexy outfit came knocking at his door. He had just completed his drama shooting that night and was planning to return to Hong Kong the next day. He greeted the girl, who was his costar, at his door.

“Someone called me and told me to stay with you!” replied the actress.

“Are you crazy?” Shawn cried in a stutter. “I did not order take out! You got the wrong guy!” He slammed the door shut.

After a few minutes of knocking on Shawn’s door, the actress finally left. Shawn expressed that if it was not necessary, he would not open his door. When his work would be done for the day, he would return to his hotel room first thing and avoid attending parties with the production crew. He also rarely goes on Weibo or WhatsApp. He did not want people to use him for promotion.

Touted as Moses Chan’s successor, Kenneth Ma admitted that he hopes to shoot mainland Chinese dramas, despite hearing rumors that mainland Chinese actresses can be a bit aggressive. He said that he once worked in mainland China for TVB and Hunan TV’s collaboration program Strictly Come Dancing <舞動奇蹟> dance competition, and made friends with his dance partner, Niu Mengmeng (牛萌萌).

Kenneth joked that because he lacked charisma, Mengmeng was not attracted to him. He also expressed that he does not consider himself to be a “good deal” but sees Ruco Chan (陳展鵬), Ron Ng (吳卓羲), Bosco Wong, and Raymond to be better instead.

The 39-year-old TVB actor has heard about the rumors of mainland Chinese actresses greeting Hong Kong actors at their hotel room doors. If he encountered a similar situation, Kenneth admitted, “It really depends on how warmly she greets me, and to see if it’s under an acceptable range. If we have feelings for each other, we can consider seeing each other. However, I will not be able to accept it if it’s things like stealing phones or breaking into rooms. I don’t think we could even be friends if that happened!”

Bosco Wong had a fair amount of romantic rumors with various mainland Chinese actresses, especially after breaking up with his girlfriend of seven years, Myolie Wu (胡杏兒), last summer. Bosco said, “I’m used to having these fake rumors. I do not get upset because they are all very fake. I haven’t even met some of my rumored girlfriends before! And there were also some whom I only worked with for about two scenes. We would not contact each other in private. Of course, group photos are inevitable, especially on set. If fans ask a photo from us, I wouldn’t say no!”

On how to avoid overly passionate costars, Bosco said, “I will try not to stay in the same hotel as her. I will suggest to the production crew that I want to stay at a different hotel. That way, not only can rumors be avoided, but I can also get my privacy and quiet time. I rarely go out and socialize after work! I don’t want another exaggerated story to be written!”

Like Shawn and Bosco, Taiwanese actor Nicky Wu (吳奇隆) will avoid attending social gatherings or dinners when his day’s work is completed. He will also avoid getting too personal with his costars. When someone knocks at his door in the middle of the night, he will call his manager and assistant to help him. Nicky expressed that he is not against dating his costars, but after going through one devastating marriage, he admitted that starting a new relationship will be difficult. He is a traditional person and does not believe in love at first sight. He also dislikes girls who are too impulsive.

“When I am filming, I am really serious and intimidating,” joked Kevin Cheng, one of Hong Kong’s highest-paid actors in mainland China. “Because I need to concentrate on reading my script, I will try not to talk with too many people when I’m not on set. Not many people want to approach me either. After work is done, I will not go out and socialize.”