The Forensic Heroes series has always been well-received and loved by audiences, so TVB has continuously leveraged its popularity and gifted fans Forensic Heroes 4 <法證先鋒IV> not long ago. With the fourth drama’s success, TVB might have plans to roll out another installment to the popular franchise. This news comes after “golden producer” Mui Siu Ching (梅小青) commented on Forensic Heroes 4 actress Selena Lee‘s (李施嬅) Weibo post. 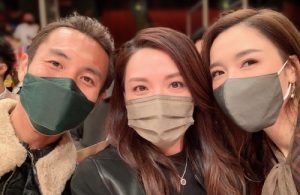 Selena uploaded a photo of her playing Dr. Man in the series to express her happiness on being nominated Best Actress for the role at TVB’s Anniversary Awards and the 25th Asian Television Awards.

She wrote, “Hey Dr. Man, you have nominations for two different awards this year. What do you think about it? I cannot be more grateful. Most people would usually forget dramas that aired early in the year. For the friends with amazing memory skills, can you go and support Dr. Man? If there’s a lot of support, then maybe there’s a chance they will film a season five? It all depends on everyone’s’ reaction.”

To the surprise of fans, Siu Ching commented, “It will happen!”

In early February, the producer announced her retirement after suffering cerebrovascular embolism, with Forensic Heroes 4 being her final project. However, it was reported earlier that TVB successfully persuaded Siu Ching to make a comeback and film the fifth installment. They allegedly even managed to get Charmaine Sheh (佘詩曼) and Linda Chung (鍾嘉欣) to make cameo appearances. Although Siu Ching denied such speculations, her response to Selena suggested that another season may be in the works!

Siu Ching later explained in an interview that her comment was only to support and motivate Selena, but she believes TVB will likely film the fifth installment because of the great feedback overall. She also clarified her participation and said, “Since I’ve already retired from the frontline, I will not be joining the production. Thank you for everyone’s support.”