TVB Time-Traveling Drama “A General, a Scholar, and an Eunuch” Airs on July 17 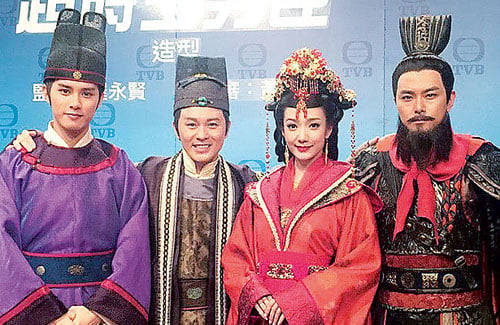 TVB new comedy series, A General, a Scholar, and an Eunuch <超時空男臣> aired on July 17. Starring Edwin Siu (蕭正楠), Raymond Cho (曹永廉), Matthew Ho (何廣沛), Kristal Tin (田蕊妮), Grace Wong (王君馨), and Rebecca Zhu (朱晨麗),  the drama was inspired by TVB classic, The King of Yesterday and Tomorrow <九五至尊>. The storyline follows Edwin, Raymond, and Matthew as they travel through time from the Ming Dynasty to the present in search of the missing consort, portrayed by Grace.

Grace portrays two characters in the drama. In the Ming dynasty, she is a consort. In the present time, she portrays a smug actress who resembles the consort.

Edwin, Raymond and Matthew are given shelter by Kristal, who is the owner of a Chinese restaurant. Rebecca portrays Kristal’s bratty little sister. She earns the affection of Matthew, who portrays a eunuch.

On whether she is envious of Matthew’s youthful looks, Rebecca said, “No. Maybe because he often portrays roles as a little brother, so people think he looks young. Actually, his thoughts and mindset are quite mature and manly. He is especially serious about work and will do his homework beforehand. Because of this, his portrayal of a eunuch is very natural.”

When together, the dynamic duo of Edwin and Raymond naturally trigger many hysterical moments. Adding in Matthew, the trio’s chemistry is quite refreshing. The drama’s producer, Marco Law (羅永賢), said, “Edwin and Raymond have the same sense of humor and are rowdy! Although Matthew’s experience with comedies is little, adding him enhances their chemistry.”

While Kristal and Edwin have partnered many times, it is their first time collaborating in a comedy drama. Kristal shared, “Before, I have only filmed serious dramas with Edwin. I also filmed Destination Nowhere <迷> before this, which had a very serious storyline. Filming a comedy now, it is a good break for me mentally and physically!”