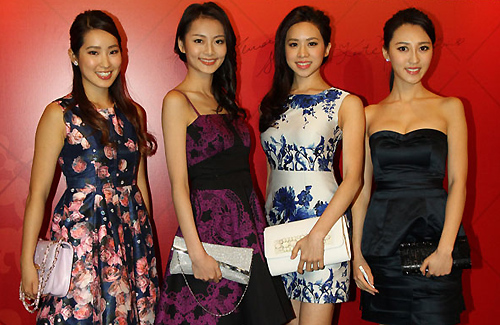 Despite the controversial results of the Miss Hong Kong 2014 competition, Veronica Shiu (邵珮詩), Erin Wong (王卓淇), and Katherine Ho (何艷娟) always exhibited confidence and swatted away any negativity aimed at them. Along with pageant contestant, Linna Huynh (黃智蓮), the three winners were invited to attend a cocktail reception for the 65th Anniversary of the Founding of the People’s Republic of China and the Chinese Film Panorama 2014.

Fulfilling her duty as the newly crowned winner, Veronica will be representing Hong Kong in the upcoming Miss Chinese International pageant. With the pageant taking place in January, Veronica has been studying more about Chinese culture and hopes to spread the achievements of Hong Kong.

Katherine disclosed that she will be flying to Japan in two weeks to participate in an international pageant. She has been practicing her dancing to prepare for the talent segment of the competition. As always, Katherine expressed that she has great confidence in herself and will put her best effort in competing. Katherine said, “I’m very happy and proud to be able to represent Hong Kong at an international level. I’ll try my best. There has been a lot of training programs; I’ve been learning how to dance and I’ve been taking makeup lessons.”