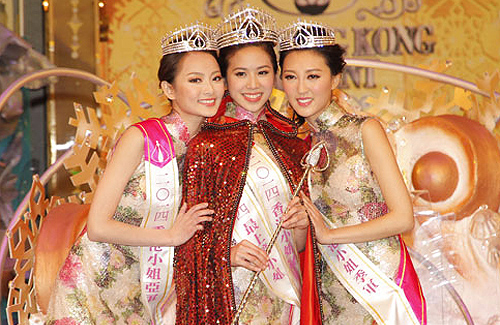 The Miss Hong Kong 2014 pageant finals concluded on August 31. Contestant #15, Veronica Shiu (邵珮詩), won the crown with 156,191 votes, as well as the Miss Photogenic and Miss Friendship awards. Contestant #9 Erin Wong (王卓淇) was named first runner-up with 28,894 votes, and #7 Katherine Ho (何艷娟) was the second runner-up with 24,903 votes. The winners were selected based on a combination of votes from viewers as well as celebrity judges.

With prior pageant experience, Veronica Shiu won first runner-up at the Miss Chinese Vancouver 2012 competition. A 24-year-old student whose dream is to become an outstanding performer, Veronica impressed Hong Kong judges with her dancing and elegance.  Standing at 5 feet 5 inches, Veronica weighs 112 pounds and her measurements are 34, 24.5, and 35 inches. She enjoys jogging, dancing, and yoga in her spare time. Asked what she gained the most from participating in Miss Hong Kong, Veronica said, “My Cantonese became my fluent and I am more poised on stage.”

Erin Wong is a 23-year-old masters student whose wish is to be an exceptional woman. Despite her 5-feet-6-inch frame, Erin only weighs 96 pounds and her measurements are 31.5, 22.5, and 33 inches. She enjoys singing, Latin dance, cooking, and traveling. Asked about her win, Erin said, “I was confident and calm during the pageant, but when the results were announced, I was stunned.”

Katherine Ho is a 22-year-old law student whose dream is to become a successful individual to serve society. With a 5-feet-5-inch frame, Katherine weighs 96 pounds and possesses a 32-23-33-inch figure. Katherine impressed judges with her educational background and appeared poised during the interview segment, successfully setting aside earlier reports regarding her active social lifestyle. Katherine thanked her family’s support to help her realize her childhood dream in joining the pageant, “I shared my experiences in the pageant with my mother. My mother cheered me on and said I will succeed!”

When the top three finalists were announced, the results stunned viewers and the show’s hosts. MCs Eric Tsang (曾志偉) and Carol Cheng (鄭裕玲) acted shocked on stage. Hot favorites, #3 Linna Huynh (黃碧蓮) and #11 Sofiee Ng (吳凱欣), were speculated to have high chances of being placed.

Contestant #1 Jan Tse (謝芷倫) snagged tabloid headlines earlier due to her dating life. Although reported to be engaged to her long-time boyfriend, Jan allegedly tried to hide her dating status. Teased once again during finals night, Jan replied, “If I were married, the marriage certificate would have my name.” MC Nat Chan rebutted,
The reports claim that you are engaged!” while Jan avoided to respond directly.

During the interview rounds, contestant #5 CK Leung (梁詩其) was asked whom she would introduce to bachelorettes Carol Cheng and Charmaine Sheh (佘詩曼). CK said, “I’ll introduce a well-bred man for Carol because she is very cultured. Beautiful ladies match with handsome men, so I’ll match Charmaine Sheh with Bosco Wong (黃宗澤).” While CK’s remarks attempted to flatter Charmaine and Bosco, who were celebrity judges at the pageant finals, the stars appeared to be embarrassed to be put on the spot.