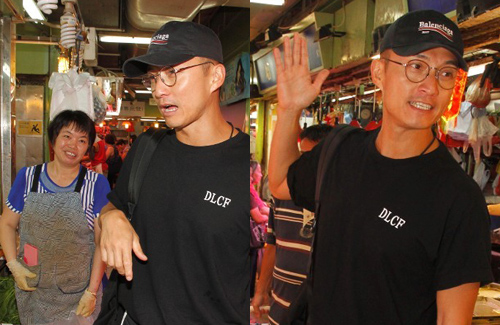 Joel Chan‘s (陳山聰) character in The Unholy Alliance <同盟> is receiving high praise from viewers. Many hope Joel wins Best Supporting Actor at the upcoming TVB Anniversary Awards, as well as Singapore’s StarHub TVB Awards. Joel gratefully responded, “Thank you everyone for supporting the drama. Lately, every time I go to buy groceries, I would have people asking me about the storyline. But to retain suspense, I have to zip my lips!” Real-life Joel is much like his character, Kent Ling, in the currently-airing TVB drama, The Unholy Alliance <同盟>. Kent is extremely sweet and attentive to his girlfriend in the drama, portrayed by Elaine Yiu (姚子羚). In reality, Joel is also eerily similar. On his day off, Joel was spotted out grocery shopping to cook a homemade meal for his girlfriend, Apple.

Joel smiled and said he enjoys cooking. “I don’t use a lot of oil [when cooking]. I mainly steam and bake. Sometimes when I see Steve Lee (李家鼎), I would ask him for some cooking tips. My girlfriend knows how to cook too, but she’s better at making soup.”

Joel has been married once, which ended up in divorce when he began dating heiress Florinda Ho (何超雲). Fortunate to have resumed his career with relative success since the messy situation, Joel has not let the past deter him from marriage again. He is currently cohabitating with Apple and does not deny the possibility of marriage in the near future. “In the present time, it is about living together and getting along. Of course, a marriage certificate is important to a woman. We have a mutual understanding. It’ll happen soon, but I have not proposed yet. I’m sure I don’t even need to propose, but I do have a plan for something romantic. I’ll wait for the right time.”