“I love acting and gain a lot of satisfaction, happiness, and a feeling of safety from it,” the actor said.

Wayne Lai’s (黎耀祥) name has long been synonymous with great acting. Even though he has been in the industry for 35 years and has already made a name for himself, he still tries his best to display a new side of himself for the audience. Though he was tempted to leave the industry on several occasions, his passion would be reignited when he comes across a great role.

A seasoned actor, Wayne fluidly adapts to the demands of his roles. At 56 years old, he followed a grueling workout and diet regime for Death by Zero <殺手>, one of his most challenging roles to-date. His hard work paid off and his shirtless scenes showcased his muscular body. He does not feel the process was tough, and views it as a necessity for work. 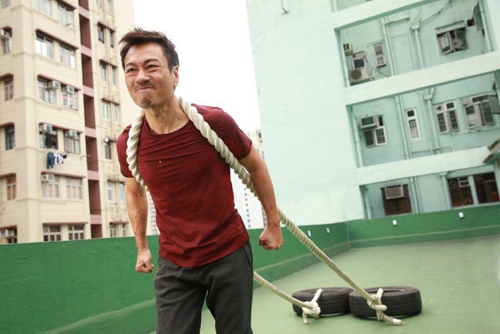 Thought of Leaving the Industry

Even though he is a quiet and introverted person by nature, Wayne learned to overcome his shyness when he switched from being a TVB administrative staff to actor. “At one point, I was very afraid of dealing with crowds. I learned later that this is called social anxiety disorder. I started my career behind the scenes at TVB–it was never boring even though it was an office environment. I liked to sing and dance and parody Roman Tam (羅文), so my colleagues encouraged me to sign up for TVB’s artiste training class.”

From an extra to supporting roles, and finally to lead roles, Wayne has experienced it all during his career. He views himself as a hard worker and in his world, there is only acting. “When I was an extra, I once filmed six different dramas from 6 a.m. until the next day. Back then, there was not much pay.” Though he receives a lot of respect for his perseverance, Wayne disclosed that the thought of leaving the industry would cross his mind every few years. Coincidentally every few years he would be cast in a great drama that reignites his passion and interest for acting.

The turning point in his career was his role as Chai Gau in Rosy Business <巾幗梟雄>, which brought a lot of awards, recognition, popularity, and money, but Wayne did not let this affect him. “For me this role didn’t cause much change personally. It only meant that I was busier at work and had less time to sleep. I’ve always loved living in my own world. It doesn’t matter how others view me–my values are not dependent on others. I am not someone to chase popularity, and I will not be arrogant just because my acting is good.”

Growing up in a normal family, Wayne’s approach in life has been very down-to-earth. For Wayne, acting is not about fame, but rather to achieve a sense of security. “In acting, everything is very predictable due to the script. It is different from life where the future is unknown. You don’t know what will happen the next second and what difficulties you will encounter. However, in acting it is very safe. Most obstacles can be overcome. If I fall ill, I know that I will die in three months according to the script. It is better than not knowing when I will die in real life. People often say that I have a lot of perseverance, and I don’t dare agree. It just so happens that nothing has blocked my path yet. I love acting and gain a lot of satisfaction, happiness, and a feeling of safety from it.”

Wayne’s image as a loving husband is well ingrained into everyone’s minds. Without any romantic rumors in his 23-year marriage with his wife and manager Julia, Wayne has a very calm and even- tempered personality which resembles his onscreen persona in Off Pedder <畢打自己人>. Wayne laughed, “I often joke that my wife and son always gang up on me. They are very active, and I just follow behind.”

Good relationships in life are not sustained easily between parents, children, friends, and colleagues–they require wisdom in management. Since his son is already an adult, Wayne has eased off his parenting role and allows him a lot of freedom. “I don’t always understand the younger generation, and I can only give him some advice based on what I have gained from my life experiences. If he does not want to listen, then I will not bother him. I am very open about this. Everyone in life is just a passerby, why should we be so stubborn?”

Trying to keep his needs simple, Wayne believes that survival comes first before enjoyment. “People need to have life in order to survive. In order to do that, you must not die. And how do we not die? It’s simple, we just need food to eat, so really there is no meaning to materialist possessions. Once you are able to sustain life, then you can chase after your dreams and have the ability to control your life.”