The drug scandal at Kenny Wong’s (黃浩) restaurant sparked the media to dig further for the drug habits of Hong Kong celebrities. A recent Hong Kong tabloid expose of the drug addicts received major buzz on the internet, with netizens debating who the described characters are.

The “informer” who spoke to the tabloid has been a drug addict for ten years. He had worked in the industry before and was friendly with many insiders. Since all of them have the same “interest”, they have gatherings once in a while. Sometimes there were artists buying “rounds” for everyone attending.

“In the past, artists preferred to keep their drug habits to themselves. However, over the past few years, many younger addicts decided it is better to enjoy the drugs with friends,” the insider proceeded to reveal the drug habits of celebrities he knew.

The most lavish druggy is “Miss Silver Spoon.” It was said that although she is extremely popular, the super-rich drug addict does not have many true friends. Most of her friends know the well-off heiress has the best grade to offer, so they stick around for the free drugs. Due to her buying power, she has achieved a volume discount status. With help from her friends, she can easily spend around $100,000 HKD on their drug parties.

Unlike the connoisseur “Miss Silver Spoon” who looks out for her friends, “Cokehead Beauty” is more business oriented. It was said that the actress was so deep into cocaine, that she had to become a distributor to support her habits. Now she is her own supplier, and also takes care of her customers from the entertainment industry. The main clients of her product lines are mostly younger artists. Since she is well known in the industry, stocks only high-grade products, and offers a pleasant safe haven to enjoy and experiment with her products, her business is booming.

It was rumored that the most overboard of all drug queens is the “Gweilo Loving Cougar”. This award-winning actress is well known for dating only foreigners. She has rarely been seen on screen over the past few years, but still commands a high fee simply because she still has a market. However, many older generation directors will avoid working with her unless they are forced by the producers. Even though she is an extremely talented actress, she is known for her heavy addiction to marijuana. It was reported she was seen walking around studios with joints in her hand.

Both the “Drug Queen of Style” and the “Snorting Mom” have beautiful children and should really be spending more time with them. Instead, they spend a few hours a day doing their favorite past time. It was rumored that the “Snorting Mom” is not a picky person and takes weed, cocaine, and more. She has her own special room that is off limits to everyone. When it is time for her to communicate with her inner-self, aka hallucinations, she will lock herself up in her special chamber for a couple of hours. Her children spend time learning from their Filipino maids to become multilingual.

The Scarface of the Hong Kong entertainment industry, “The Emperor” was said to be heavily addicted early on in his career, but miraculously managed to break the habit later on. Now he is a super star and is well respected. Seeing the high demands from the entertainment industry, he decided to seek profits through his drug distribution channels instead.

“Mr. Temper” is a good friend of “The Emperor”, and has been a junkie for 20 plus years. His claim to fame was beating up his personal assistant for his incompetency in rounding up some cocaine for him, or perhaps mistakenly got a six pack of the bottled version. The assistant was hospitalized for a week, and “Mr. Temper” ended up spending $100,000 HKD to settle with the assistant. Surprisingly, even with these bonuses, the assistant decided to quit. 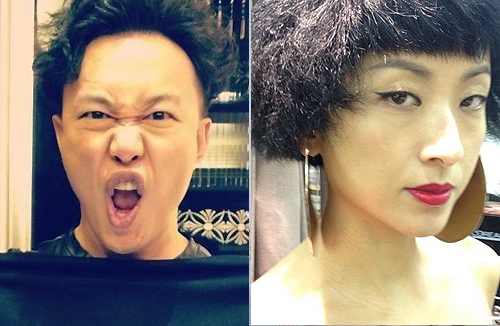 Eason Chan had a bitter fight with Hilary Tsui due to her drug scandal. Hilary is now hiding in Japan.