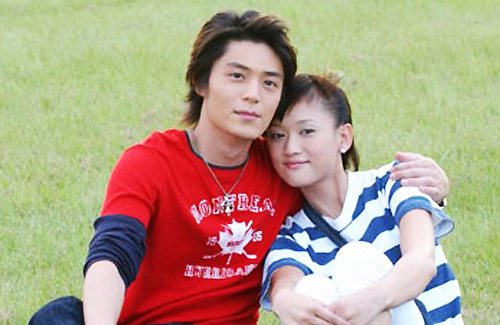 Wallace Huo’s (霍建華) romantic life has been quiet since dating Taiwanese actress, Joe Chen (陳喬恩), several years ago. With the pair starring in Swordman <笑傲江湖> as tragic lovers and sharing a kissing scene together, fans watched with hopes that Wallace will once again rekindle real-life love flames with Joe.

As Wallace and Joe portray onscreen lovers, fans hope that their offscreen romance will blossom once again. In 2004, Wallace and Joe fell in love after starring in 2004 Taiwanese drama, 100% Senorita <千金百分百> and was spotted shopping for underwear together at a night market.

Does Wallace have room in his heart for Joe or is it occupied by another woman now? In an earlier interview, Wallace said that there was a past love that he continues to remember in his heart. “In my heart, there is a place saved for her no matter what happens in the future.” Although Wallace avoided mentioning who his unforgettable lover is, many speculated her to be Joe, who was his only acknowledged ex-girlfriend.

Although it is expected that their collaboration in Swordman would generate romantic rumors, Joe does not mind. When she accepted the role of Dongfang Bubai, Joe did not know that Wallace would portray Linghu Chong. Since they did not end their relationship on bad terms and both were professional actors, Joe did not mind working together again.

Asked about rekindling his romance with Joe, Wallace said that he has good relations with her and did not wish to change their friendship. “We are both adults. We don’t mind how other people see us and will not feel awkward. There are some things that must be let go. Even if we don’t see each other this year, maybe we will see each other next year. Why resist it? I will face the matter with a mature attitude and demonstrate for all to see.”