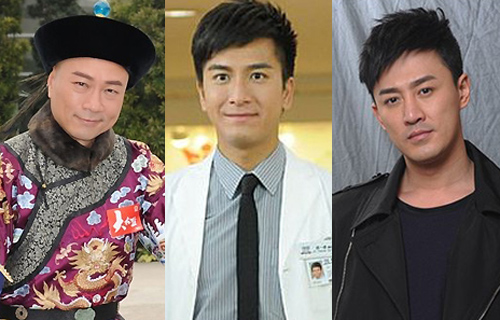 With the TVB Anniversary Awards event taking place on Monday, December 17, TVB artists have limited hours to pull in more votes in the new one-vote-per-person system. Wishing that their performances did not fail them, artists also have to put forward their best public relations skills in the critical hours before the polls close.

Every game has its own rules and this new voting system may not be to the artists’ disadvantage though. The ultimate winners will not be limited by the ratings of the respective dramas they starred in, but rather their affinity with the audience.

This year’s Best Actor race has largely been between Wayne Lai (黎耀祥)and Raymond Lam (林峯), until Kenneth Ma (馬國明) proved that he also had strong audience backing after winning Malaysia’s TV King award at the Astro on Demand Awards.

Wayne realized that the audience voting system may give Raymond an advantage. Being the younger and more dashing one of the two, Raymond naturally has a greater fan base. This, however, did not shake Wayne’s confidence, but he also saw that Kenneth has a good chance. “The middle class loves Kenneth Ma! His character in The Hippocratic Crush <On Call 36小時> is much loved. The votes can still sway any way. This system makes it more challenging and fun.”

A detail that both artists and voters noticed with interest is the date of the 45th TVB Anniversary Awards ceremony. With the telecast so close to the airing of The Confidant <大太監>, it is no doubt some votes may be swayed to favor the cast of The Confidant. Wayne thinks that may be to his advantage since his character in The Confidant changes throughout the serial and may move viewers. In spite of his confidence, Wayne does not underestimate his opponent. “Raymond has matured and outdone himself. He has managed to bring out his own style successfully.”

Raymond: “Do Not Belittle My Efforts!”

On the other hand, Raymond does not want to win based on his popularity alone. “I put in a lot of effort in every role I play. To say that I will win because I have more fans will belittle the efforts I put in.” That does not stop him from wanting the award for himself.

What Other Nominees Have to Say

The other nominees of Best Actor Award looked upon the award more lightheartedly.

2011 Best Actor Award winner, Kevin Cheng (鄭嘉穎), casts his vote for Kenneth. “This year it will be my turn to be happy for someone else to win the Best Actor award. Everyone has a chance. But I’m biased; I’m going to cast my vote for Kenneth,” Kevin said good-naturedly about his A Fistful of Stances <鐵馬尋橋> brother.

Also going to the awards ceremony with a relaxed mood, Moses Chan (陳豪) has high hopes for Wayne Lai to win the Best Actor award. He likes the idea of more voters, and strongly supports the voting system this year.

Having gained many nods of approval for his acting for many years, veteran Damian Lau (劉松仁), has no intention to compete with the younger actors. “I have no chance, but I’ll cast my vote for my ‘son’, Kenneth! If you let me choose, of course I’ll choose a young and handsome actor!” Damian spoke highly of his Silver Spoon, Sterling Shackles <名媛望族> son.

35 comments to Will Wayne Lai, Raymond Lam, or Kenneth Ma Be TV King?