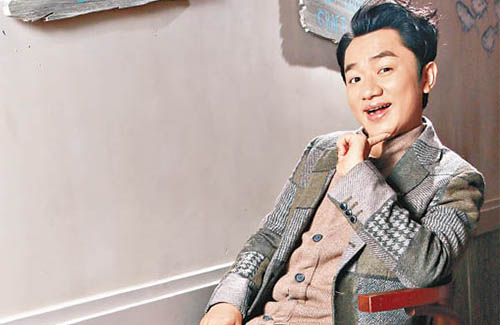 When Wong Cho-lam (王祖藍) left TVB management to establish his own personal studio in 2015, the agency was only meant for himself and his wife, Leanne Li (李亞男). He didn’t expect his studio to grow into a much larger agency, now the home for18 artistes.

“My phone exploded after news about my studio start spreading,” said Cho-lam. “Many of my friends misunderstood, thought I wanted to sign my own artistes. After a few more talks and a lot more meetings, I’ve somehow ended up with 18 artistes.”

Cho-lam first got the idea of establishing his own studio a few years ago, when he was a regular on the first season of the Chinese reality TV series Hurry Up, Brother <奔跑吧兄弟>. Cho-lam got along with the cast, which inspired him to start his own personal studio. The studio was originally meant for himself and his wife, but news of his agency started spreading, and Cho-lam couldn’t help but to sign more artistes under his wing.

On how he maintains the stress of having to manage so many people, Cho-lam said, “Know how to separate your own job from others. Learn how to let things go. Different people require different managing. Coincidentally, my uncle Sin Wai-chi (冼偉智), who used to work for ATV, has experience in managing people, so he’s helping me out here in Hong Kong. Another team is helping me in Beijing.”

To Target All Chinese-Speaking Regions

Despite his agency being a “small business”, Cho-lam said he has been setting sights on the Mainland Chinese market, hoping to sign more artistes from the homeland. “All Chinese-speaking markets are important for me. For Cantonese, there is Hong Kong and Macau. For the Mandarin market, I hope to recruit a lot more talent from the north. I really want to tell the world that we still have a lot of talented artistes, actors, and singers here in Hong Kong. Plenty of talent.”

Cho-lam may not be aiming to be an entertainment tycoon, but he hopes that his projects could be positive contributions to the industry. “It’s not like my Inbound Troubles series <老表系列> have severely impacted the entertainment circle. It’s impossible. We don’t have the power to do that. We just want to leave some kind of contribution to stimulate the market, to create more competition for everyone.”

To successfully introduce more local-groomed artistes to the Mainland Chinese market, Cho-lam believes that it is important to assess the bigger picture of the market before bringing anyone else in. “You look at the dishes first before you eat the rice. There’s a lot of things you need to prepare, and you should always have a backup. Although reality TV is very popular at the moment, you can’t focus all of your energy in it. Drama, film, and social media should have equal focus.”

No Time for Babies Yet: “Let My Wife Rest”

24 hours in a day isn’t enough for Cho-lam. “I need to save my time for family too. I can’t ignore my wife and mother!”

Cho-lam and Leanne tied the knot on Valentine’s Day, 2015. The couple would love to have children, but due to their work schedules, family expansion plans have to be postponed.

“We really need to get better rest first,” said Cho-lam. “At least after this year. I’ve only just moved out of the house to live with my wife. I’ve never lived without my mother before! I also made sure I got an apartment for my brother and sister before moving out.”

Cho-lam said the next two years is crucial for his relationship with Leanne. “Once we have kids, it won’t be just the two of us anymore. That’s why I don’t want to have kids so soon. My wife is the gentle, nurturing type. If we have kids, she’s going to spend most of her time at home with them. I want her to rest well and have fun before becoming a mother.”

Though he doesn’t have the mind of an investor, Cho-lam has done property investment over the years. Aside from buying a new house for his wife Leanne, Cho-lam has also spent $8 million HKD in the downpayment for his own family.

“I want to give my family the best. Out of the $10 I earn, $8 would go to my family. I don’t spend that much for myself. My mother and younger sister still live together, but they are responsible for their own house. I only helped them out in the downpayment. I can’t be taking care of them forever. That’s unhealthy.”