Rosina Lam (林夏薇) was a workaholic. She was like a rolling camera—she was willing to sacrifice everything for her acting career: time, money, health, and even her marriage.

“We never actually got to spend time together to know each other more,” said Rosina. The 32-year-old, who married businessman Jason Mok (莫贊生) in 2015, has been struggling to keep up with her long distance relationship with her husband, even though they live together. “When I go to work, he’s off work. When he’s eating, I’m getting ready to leave.”

Acting has always been Rosina’s dream since childhood. After high school, she immediately enrolled in the Central Academy of Drama in Beijing to study acting. Upon graduation, she became a member of the Hong Kong Repertory Theater, and following her cousin’s footsteps, she joined TVB. Her debut drama was 2011’s Til Love Do Us Lie <結‧分@謊情式>.

Rosina knew that she had been neglecting her marriage and husband, but it took two years to figure out—in 2017, when she was in the midst of shooting the TVB drama Our Unwinding Ethos <十二傳說>. She had just completed three other television dramas prior, was in the middle of other projects, and didn’t have any time to spend with her husband until that day. It was the Winter Solstice, and Rosina finally had a break from work. 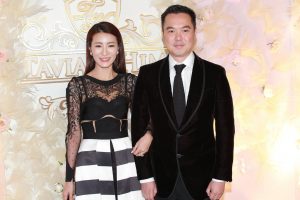 The couple decided to eat out that night. Just as Jason finished ordering the menu, Rosina received a call from work, asking her if she was available for some last-minute reshoots. The crew was under, meaning that the filming process was finished earlier than expected. “I immediately apologized to my husband, and told him that I needed to leave. He asked if I could just eat a little before I go, but I said I couldn’t, I had to go back. I am really a workaholic.”

That was the moment when Rosina realized what she was doing. “It wasn’t my first time doing that to him, but he never complained to me about it. It was then when I realized that I had to stop. I had to save time for him.”

After shooting The Golden Building <今宵大夏>, Rosina’s last drama in her TVB contract, she decided against to leave the station. It was a difficult decision for Rosina to make—for years, Rosina was known for being the younger cousin of Raymond Lam (林峯), and it took her over five years to finally become a lead in her own TVB drama, out of Raymond’s spotlight.

Her decision to sign with Shaw Brothers instead of renewing her TVB contract would mean that she would have to sacrifice her chances of winning TV Queen, but Rosina said she was okay with that. “There will always be a goal to chase after in every stage of your life. You will never stop.”