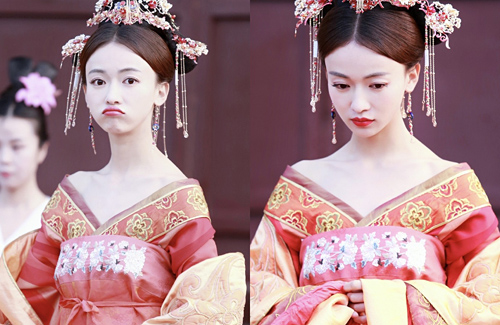 Attaining massive popularity from starring in palace-themed dramas Story of Yanxi Palace  <延禧攻略> and The Beauty of Hao Lan <皓鑭傳>, Chinese actress Wu Jinyan’s (吳謹言) outfits onscreen have caught on with many female viewers who try to mimic her elegant style. Despite this, the actress’s recent appearance in a Tang Dynasty period costume on a variety program evoked mixed reactions from netizens who were less than impressed with her stylist’s efforts.

Stylist to Blame for Unflattering Look?

Going on exploratory travelogue program Youth Periplous <青春環遊記>, Wu Jinyan wore an elaborate red-gold headgear and a Tang dynasty costume, which revealed her fair skin and prominent collarbone. Her high-waist red skirt and the top’s gold floral embroidery details also added sophistication to her outfit. In Story of Yanxi Palace, which narrated Wei Yingluo’s rise from a female maidservant to empress Fucha, her character had undergone a corresponding outfit transformation, while The Legend of Hao Lan saw the actress donning Qin dynasty costumes. A departure from the settings of her two onscreen dramas, the Tang dynasty outfit she wore on the program displayed her off-shoulder look.

However, netizens seemed to be drawn to how her slopping shoulders seemed especially obvious in the gown, leaving comments such as “I can’t say where but it’s a little weird” and “Something looks off from the neck down?” One comment summing up her fashion faux paus, “Her upper traps along with prominent collarbone do not go well with off-shoulder tops. Her stylist should be punished!” Some suggested that the actress should have put on some neck accessories, while others made negative comments about her figure, saying “her chest is not ‘Tang-dynasty’ enough” and that she is “too skinny”. However, there were also some fans with positive feedback who called on others not to be overly critical.