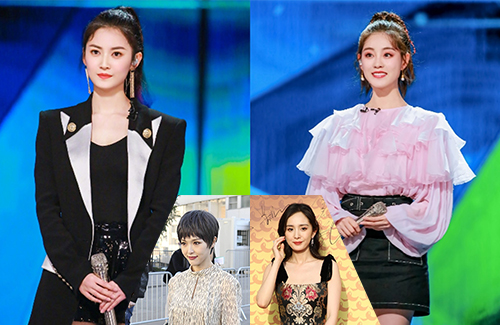 Yang Mi (杨幂) and Tiffany Tang (唐嫣) used to be the best of friends, and it was no hidden secret. Born of the same generation in entertainment, Yang Mi and Tiffany became close after collaborating in 2009’s Chinese Paladin 3 <仙剑奇侠传三>. The duo were, at first, inseparable—they attended many public events together, frequently socialized on social media, and Yang Mi also appointed Tiffany as her only bridesmaid in her marriage to Hawick Lau (劉愷威) back in 2014.

But that was all in the past. Sometime in 2016, their friendship started to break. They stopped appearing on each other’s social media, stopped attending gatherings together, and even stopped acknowledging one another. At a Vogue Event they attended last year—their first joint appearance in years—Yang Mi and Tiffany completely ignored each other.

Though Yang Mi is clearly the winner in the popularity contest, Tiffany isn’t going to back down without a fight.

Yukee Chen (陈钰琪) and Zhu Xudan (祝绪丹), who respectively play female leads Zhao Min and Zhou Zhiruo in Heavenly Sword and Dragon Slaying Sabre <倚天屠龙记>, have both been rising in popularity rankings, all thanks to their positively received performances in the wuxia drama.

And just like how dramas tend to emulate real life situations, fans have pitted Yukee and Xudan against each other—much like their characters in the show. Out of the two, Yukee clearly has the larger following, with 2 million more followers than Xudan on Weibo.

Interestingly, both rookie actress are respectively managed by Tiffany and Yang Mi. Yukee is Tiffany’s first managed artiste, while Xudan is Yang Mi’s latest star after successfully pushing out Dilireba (迪丽热巴), one of the highest-earning TV actresses in the country. Viewers pointed out that while Yang Mi may have the bigger brand, Tiffany has managed to push out the bigger star this year.