Yang Mi (杨幂) and Tiffany Tang (唐嫣) used to be pretty close friends, with Yang Mi even making Tiffany her bridesmaid at her 2014 wedding with Hawick Lau (劉愷威). But over the years, the friends noticeably grew apart, with rumors saying that they had even fought, leading to their break. 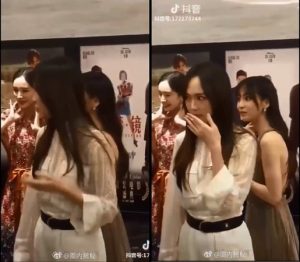 On November 7, Vogue China hosted a film fashion event in Beijing, inviting top Chinese film and TV stars to do a shoot for the magazine. Yang Mi and the newlywed Tiffany Tang were among those who attended.

Not much footage was made public, but a backstage video recording of the event was leaked online, revealing that Yang Mi and Tiffany had nearly zero interaction. The duo were a few steps away from each other, with Angelababy being squeezed in between them. During the big group photo, Angelababy sat next to Tiffany.

The video quickly became a hot topic online, with netizens wondering what really happened between the former friends. A netizen screen-shotted a part in the video where it was claimed that Yang Mi was rolling her eyes at Tiffany, but most agreed that it was probably Yang Mi blinking her eyes. 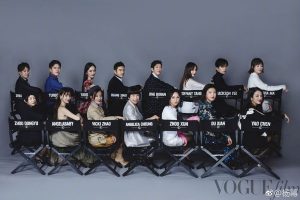