At the Tencent Video Line Up, the platform promoted its upcoming dramas, releasing many trailers for the first time. One of the most eye-catching summer releases is Yang Yang (杨洋) and Dilraba Dilmurat‘s (迪麗熱巴) romantic drama You Are My Glory <你是我的荣耀>, which will be premiering on June 27, 2021. 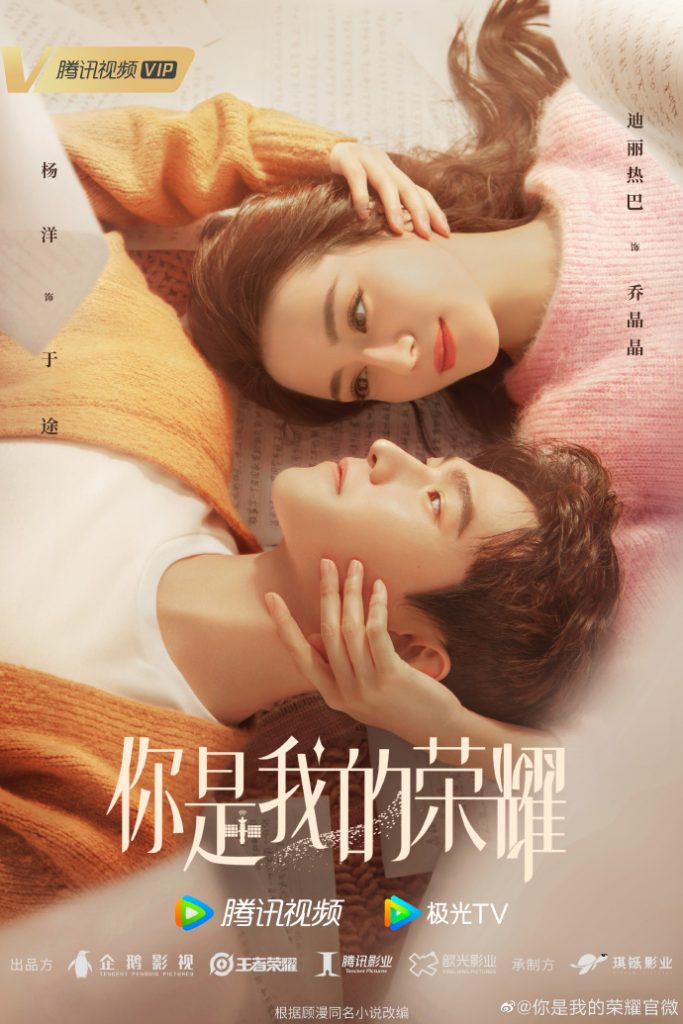 You Are My Glory follows the love story between popular celebrity Qiao Jingjing (Dilraba Dilmurat) and aerospace engineer Yu Tu (Yang Yang) who were former classmates. Although they had favorable impressions of each other in high school, they kept their feelings inside their hearts as they were bound towards different paths.

Meeting again in an online game 10 years later, they reconnect and encourage each other to follow their own dreams. A second chance at love is always sweet and must be cherished….

A faithful screen adaptation is ensured as Gu Man (顧漫), the author of the original novel, signed onboard as You Are My Glory‘s scriptwriter. Gu Man’s other notable work was adapted into 2016’s Love O2O <微微一笑很倾城>, which brought Yang Yang superstardom and made him the crush of every teenage girl.

With the broadcast of You Are My Glory only three weeks away, Yang Yang and Dilraba stepped up their interactions on Weibo. Dilraba wrote that meeting Yang Yang’s character “is love in its most beautiful form,” while the actor responded in kind calling Dilraba by her character’s name and asking for her “to give her remaining time to him.”

Dilraba and Yang Yang making a stunning couple, and the trailer for You Are My Glory showcases many of their sweet moments. While Dilraba’s character is full of energy, she can be self-centered and sometimes confused. In one scene, she tries to take a picture of Yang Yang who was sleeping and ends up tripping over the sofa onto him. She also tries to make him a latte art rabbit, but the results are a far cry from being artistic.

Teasing at passionate scenes in the drama, Dilraba is seen gazing lovingly at Yang Yang’s character, who is regarded as the perfect package. Not afraid to be proactive and expressing his feelings, Yang Yang boldly asks, “I want to stay for the night. Is it too much?” Although no kiss scene is included in the trailer, their sizzling chemistry is evident.

“You Are My Glory” Trailer

Aside from Youth of Glory, Yang Yang is currently filming Tencent production, historical fantasy drama Who Rules The World <且试天下> with Zhao Lusi (赵露思) in Hengdian.

In addition, Tencent announced that upcoming historical drama Love Like The Galaxy <星汉灿烂, 幸甚至哉> will be headlined by Leo Wu Lei (吴磊) and Zhao Lusi, who will be reuniting after The Long Ballad <长歌行>.

TAGS: Dilraba Dilmurat, Yang Yang, You Are My Glory