Yang Zi (杨紫) and Ma Tianyu’s (马天宇) new drama is all kinds of entertaining, but viewers still aren’t sure if it’s the good way or bad way. 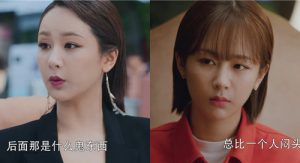 My Mowgli Boy <我的莫格利男>, which premiered in China via iQIYI today, tells the story of a young start-up CEO and her relationship with an isolated man who was raised in the forest. The first episode features Yang Zi appearing in a “super woman” CEO look that isn’t entirely flattering, as her appearance highly resembled the Porsche-driving woman who went viral after she got into a fight with a man driving a more modest car at a busy intersection in Chongqing.

It turns out that—yes, Yang Zi’s look was a parody of the woman, and her character Ling Xi, CEO of a small fashion studio, does not have a super glamorous life. Ling Xi was in the forest filming a commercial when she comes across a Tarzan-looking man, portrayed by Ma Tianyu. Apparently, many children get lost in the woods every single year—some starve to death, some get mauled to death by wild animals, and some manage to find their own ways to survive, such as Mo Geli (“Mowgli”). 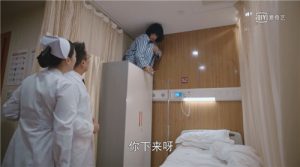 Ling Xi takes Mo Geli to the hospital, but the man is glued to her, even following her home. The man is fascinated by the modern trinkets around her home, but Ling Xi, unable to handle the additional headache, contacts the police. She tells Mo Geli to “get lost” as the police are on their way and Mo Geli, who was not supposed to understand human language, somehow manages to understand what Ling Xi is telling him.

The police arrive and then promptly leave. Mo Geli, as how romantic comedies go, sticks by Ling Xi, and with her guidance, learns how to navigate through modern society. Through Mo Geli, Ling Xi learns the simple ways to happiness, and gains a new appreciation for nature and minimalism.

What are your thoughts on the first episode?