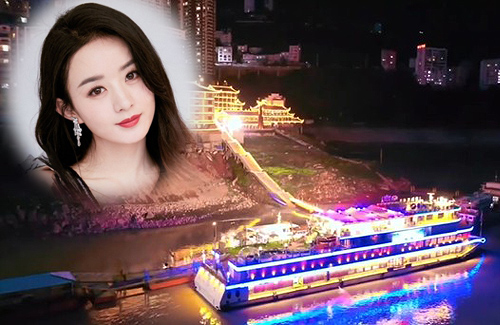 In the past, popular reality show Chinese Restaurant <中餐廳> generated a lot of praises for incorporating cultural knowledge into topics of different cuisine. The four season will star Huang Xiaoming (黃曉明), Zhao Liying (趙麗穎), Sean Zhang (張亮), and Jack Lin (林述巍) in its fourth season. Due to the pandemic, the cast did not film overseas but filmed aboard a cruise ship in Ensi, Badong county instead.

Variety show fans are in for a treat, as the last time Zhao Liying filmed in a variety show was 72 Floors of Mystery <七十二層奇樓>. Last year, three months after giving birth, Zhao Liying immediately returned to work and filmed drama Legend of Fei <有翡>. Though preoccupied with married life and her subsequent pregnancy, fans are delighted that she would take part in the upcoming season of Chinese Restaurant.

As filming is currently underway, netizens wonder how Huang Xiaoming’s role will change in the latest season. In the first season, he appeared as the store manager. In another, he showed up as the tourist. Many are curious as to what surprise role he will pull off in season four. With the return of the popular show and an all-star cast, many are looking forward to its premiere on July 31.